February 20, 2013 Ph.D. in composition and theory from UC Davis Bachelor's in Music from the Juilliard School

Chris Castro is a composer and double bassist from Brooklyn, New York. His music has been described as “on par with Varèse,” giving him the nickname “The New Colossus of Sound.” He is a recipient of Chamber Music America’s 2021 Classical Commissioning Award. His new work, Canções dos Desassossego (Songs of Disquiet), will be written for the Lyris Quartet and soprano Sharon Harms and premiered in 2023. His music has been performed by Sharon Harms and the Composers Conference Ensemble under James Baker (Two Songs from Brooklyn Narcissus), the St. Louis Symphony under David Robertson (Choruses III), pianists Sarah Cahill and Eric Zivian (IV-I), piano duo HereNowHear (Beethausenstro - Castockhoven) and the Lydian String Quartet (Choruses IV). He is the 2022 Guest Composer for the James Tenney Memorial Symposium, composing and collaborating with the New Mexico Contemporary Ensemble. He currently lectures at UC Davis and Sacramento State University. He has a Ph.D. in composition and theory from UC Davis and a bachelor’s in music from the Juilliard School in both double bass and composition.

He currently lectures at UC Davis and Sacramento State University.

“Sing High” composed by Christopher Castro, alum now lecturer, has its world premiere on Saturday, Feb. 16. The Camellia Symphony Orchestra, under the direction of Professor Christian Baldini, performs the piece as part of their program, “Past, Present & Future.”

The concert begins at 7:30 p.m. at C.K. McClatchy High School Auditorium in Sacramento. There is a pre-concert talk beginning at 6:45 p.m.

Compositions by graduate students Philip Acimovic and Christopher Castro are to have their world premieres in an upcoming Left Coast Chamber Ensemble concert. Acimovic’s Reverent Murmurs for Two Pianos and Castro’s IV-I for Two Pianos are included in the program Visions de l’Amen.

The concert will be performed in two Bay area venues, first on Feb. 1 and 3 at the Berkeley Piano Club, then on Feb. 5 at the San Francisco Conservatory of Music. 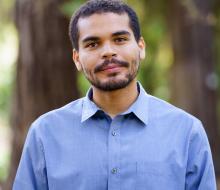 February 20, 2013 Ph.D. in composition and theory from UC Davis Bachelor's in Music from the Juilliard School
Room 1108, Music Annex
crcastro[remove-this-and-replace-with-at]ucdavis.edu