Bryce Cannell is currently a Lecturer of Music in the Department of Music at CSU Fresno.

Bryce Cannell’s string quartet, Refractions, has been published by the Society of Composers (SCI) Journal of Music Scores (Vol. 50).

Composer Bryce Cannell was awarded the second prize in the 2011 Carl von Ossietzky International Composition Competition for his work Isochronous for Percussion Quintet. An award ceremony will take place on July 13, 2012, at the Carl von Ossietzky Universität in Oldenburg, Germany where the winning works will be performed by either the ensemble Schlagwerk Ossietzky or Schlagwerk Nordwest, under the direction of composer and percussionist Axel Fries. Press release (in German). 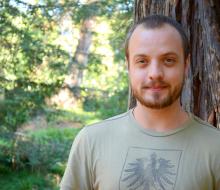