Pablo Ortiz is a professor of composition at the University of California, Davis. Prizes and commissions include those from the Fromm Music Foundation in 1992, a Guggenheim Fellowship in 1993, and the Charles Ives Fellowship from the American Academy of Arts and Letters in 1996. In 1997 and 1998, Ortiz was commissioned to write two chamber operas, Parodia and Una voz en el viento, by the Centro Experimental Teatro Colon in Buenos Aires. In 1999 he was commissioned by the Koussevitzky Foundation to write a piece, Raya en el mar, for the San Francisco Contemporary Music Players.

He received a grant in 2000 from Fideicomiso para la cultura Mexico-US to write children’s songs. In 2004 the Gerbode Foundation commissioned Oscuro, for Chanticleer and the San Francisco Contemporary Music Players. In 2008 he received an Academy Award from the American Academy of Arts and Letters. Recent premieres include Suomalainen tango, for orchestra, by the Orquestra Nacional de Catalunya, Trois tangos en marge by the Kovacik, Dann, Karttunen trio at the Museo Nacional Reina Sofia in Madrid, and Notker, for choir and organ, by Paul Hillier and the Theatre of Voices in Copenhagen. He has worked with artist Eduardo Stupia on a multimedia oratorio for female voices, harp, and percussion, which premiered at the Centro Experimental Teatro Colon in Buenos Aires, in August 2012.

This program will range widely with a groundbreaking work from 50 years ago and new works by faculty and alumni. Frederic Rzewski wrote Coming Together in 1972 in response to an uprising at Attica prison the year before. It uses lyrics based on letters by Sam Melville, an Attica inmate and uprising leader killed by police. The ensemble of professional musicians will be joined by student musicians and vocalist-actor Omai Tau for the work.

There will be a Preconcert Discussion from 6:15  to 6:45 pm with Empyrean director Sam Nichols and composers Phil Acimovic and Pablo Ortiz.

Frederic Rzewski: Coming Together (Part I)
with Omari Tau, voice

Finnish cellist to perform music by Ortiz and others in free concert October 23, 2015 (Davis Enterprise)

This opera course will focus on a number of canonic operas: Andrea Chénier, The Magic Flute, Les Troyens, Elektra, Die Walküre, Rigoletto and Peter Grimes. We will examine the connections (sometimes obvious, sometimes not) between these works and classical tragedies, the idea of catharsis, and how some themes and topics recur in different guises throughout the centuries. We will also talk about performance style and practice. The operas will be viewed on Wednesday nights, and conversations with experts on Thursdays. On Tuesdays we will situate and introduce the works. This four-unit course is taught by Ralph Hexter, Distinguished Professor of Classics and Comparative Literature, and Pablo Ortiz, Professor of Music.

Fitting a squeeze-box Argentinian bandoneón – an essential element of tango dance-hall bands – into a classical-music milieu is a bit of a stretch. The two sound-worlds are so fundamentally different that it’s hard to imagine how they could intersect. Nonetheless, star Argentinian bandoneónist J.P. Jofre and the Santa Rosa Symphony gave it a whirl on Sunday at Weill Hall in Rohnert Park, premiering a concerto for bandoneón and orchestra by Pablo Ortiz, an Argentinian professor of composition at UC Davis.

Composer Pablo Ortiz will have his Bandoneon Concerto premiered by the Santa Rosa Symphony, with J.P. Jofre, for whom the work was written, on February 7th at the Weill Concert Hall at the Green Music Center. 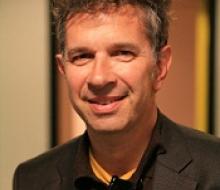