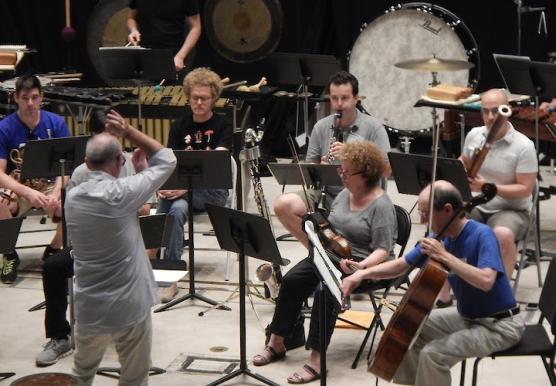 Dark Flight by Catalan (a 2021 Fromm Foundation Fellow) can be re-watched on YouTube.

Castro’s piece, written for piano trio, is titled Clock-a-clay, and was not recorded.

Headed by artistic director Mario Davidovsky from 1968 to 2019, the Composers Conference has played a pioneering role in the performance of new works by emerging composers. Founded in 1945 by Alan Carter at Middlebury College as the Composers’ Conference and Chamber Music Center, the Conference has served nearly eight hundred composers and many more amateur chamber musicians. It is the oldest and most respected program of its kind. Rohde became the Conference Artistic Director in 2019.

February 20, 2013 Ph.D. in composition and theory from UC Davis Bachelor's in Music from the Juilliard School

Chris Castro is a composer and double bassist from Brooklyn, New York. His music has been described as “on par with Varèse,” giving him the nickname “The New Colossus of Sound.” He is a recipient of Chamber Music America’s 2021 Classical Commissioning Award. His new work, Canções dos Desassossego (Songs of Disquiet), will be written for the Lyris Quartet and soprano Sharon Harms and premiered in 2023. His music has been performed by Sharon Harms and the Composers Conference Ensemble under James Baker (Two Songs from Brooklyn Narcissus), the St. Louis Symphony under David Robertson (Choruses III), pianists Sarah Cahill and Eric Zivian (IV-I), piano duo HereNowHear (Beethausenstro - Castockhoven) and the Lydian String Quartet (Choruses IV). He is the 2022 Guest Composer for the James Tenney Memorial Symposium, composing and collaborating with the New Mexico Contemporary Ensemble. He currently lectures at UC Davis and Sacramento State University. He has a Ph.D. in composition and theory from UC Davis and a bachelor’s in music from the Juilliard School in both double bass and composition.