Juan Diego Díaz is an ethnomusicologist with a geographic research interest in Africa and its diaspora, particularly Brazil and West Africa. He explores how African diasporic musics circulate and transform across the Atlantic and how they serve individuals and communities in identity formation. His book Africanness in Action (Oxford University Press, 2021) focuses on how musicians from Bahia, Brazil understand and negotiate essentialist notions about African music and culture. He is also a long-term Capoeira Angola practitioner and has led capoeira, berimbau, and samba ensembles.

Previous to teaching at UC Davis, Juan Diego held posts as a lecturer at the University of Ghana and postdoctoral fellow at the University of Essex, the latter funded by the Social Sciences and Humanities Research Council of Canada. The funded research investigates the music of the descendants of freed enslaved Africans who resettled from Brazil to Ghana, Togo, and Benin during the nineteenth century. This research has produced a book titled Tabom Voices: A History of the Ghanaian Afro- Brazilian Community in Their Own Words (2016) and the documentary film Tabom in Bahia  (co-directed with Nilton Pereira, 2017), documenting the visit of a Ghanaian master drummer to Bahia, Brazil.

His articles have appeared in journals such as Ethnomusicology, Ethnomusicology Forum, Analytical Approaches to World Music, and Latin American Music Review.

Africanness in Action: Essentialism and Musical Imaginations of Africa in Brazil (Oxford University Press, 2021), written by Associate Professor of Music Juan Diego Díaz, has won three honorary mentions by the Society of Ethnomusicology, 2022:

British Forum for Ethnomusicology (BFE) recognizes outstanding scholarship in ethnomusicology written in English. BFE has given a Special Commendation to Professor Juan Diego Díaz for his book Africanness in Action: Essentialism and Musical Imaginations of Africa in Brazil (Oxford UP, 2021) in its 2022 book prize competition. The book focuses on “tropes of Africanness” in self-identification and musical expression in the northeastern state of Bahia in Brazil. The judges praised Africanness in Action: “this is a beautifully written and profoundly impressive work which offers a critically reflexive and nuanced postcolonial representation of African music in the Black diaspora.”

The fellowship will support Díaz’s research of four communities in Ghana, Togo, Benin, and Nigeria, which were formed by the descendants of emancipated Africans who resettled from Brazil to West Africa during the 19th century.

The British Forum for Ethnomusicology (BFE) has awarded a commendation to Juan Diego Díaz in its 2022 “Early Career Prize” for his 2020 article, “The Musical Experience of Diasporas: The Return of a Ghanaian Tabom Master Drummer to Bahia,” Latin American Music Review.

Juan Diego Díaz, assistant professor of music, will discuss his book Africanness in Action: Essentialism and Musical Imaginations of Africa in Brazil as part of the series Conversations with Latin American Authors. The event will be livestreamed on Nov. 11 at 3:30 p.m.

Africanness in Action: Essentialism and Musical Imaginations of Africa in Brazil by Juan Diego Díaz has been published by Oxford University Press.

When many people think of African music, the first ideas that come to mind are often of rhythm, drums, and dancing. These perceptions are rooted in emblematic African and African-derived genres such as West African drumming, funk, salsa, or samba and, more importantly, essentialized notions about Africa which have been fueled over centuries of contact between the “West,” Africa, and the African diaspora. These notions, of course, tend to reduce and often portray Africa and the diaspora as primitive, exotic, and monolithic.

“From the Kitchen to the Living Room: Percussion and Racial Democracy in Bahia (Brazil)” Room 3201, Hart Hall

Talk made possible by the UC Davis Hemispheric Institute of the Americas as part of the HIA Noon Talks series.

Tabom in Bahia documents the visit of a Ghanaian master drummer to Bahia in search of his Brazilian roots and features musical encounters full of emotion and Axe. 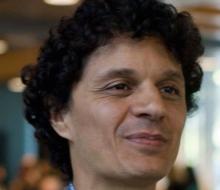