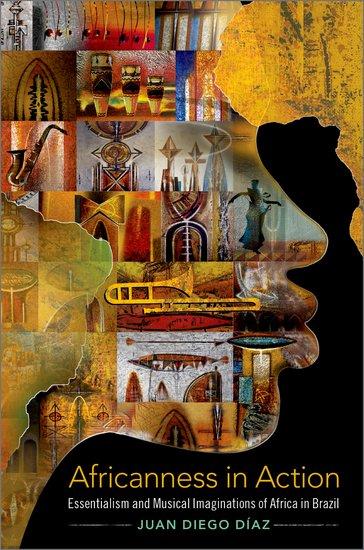 Africanness in Action: Essentialism and Musical Imaginations of Africa in Brazil by Juan Diego Díaz has been published by Oxford University Press.

When many people think of African music, the first ideas that come to mind are often of rhythm, drums, and dancing. These perceptions are rooted in emblematic African and African-derived genres such as West African drumming, funk, salsa, or samba and, more importantly, essentialized notions about Africa which have been fueled over centuries of contact between the “West,” Africa, and the African diaspora. These notions, of course, tend to reduce and often portray Africa and the diaspora as primitive, exotic, and monolithic.

In “Africanness in Action,” author Juan Diego Díaz explores this dynamic through the perspectives of Black musicians in Bahia, Brazil, a site imagined by many as a diasporic epicenter of African survivals and purity. Black musicians from Bahia, Díaz argues, assert Afro-Brazilian identities, promote social change, and critique racial inequality by creatively engaging essentialized tropes about African music and culture. Instead of reproducing these notions, musicians demonstrate agency by strategically emphasizing or downplaying them.