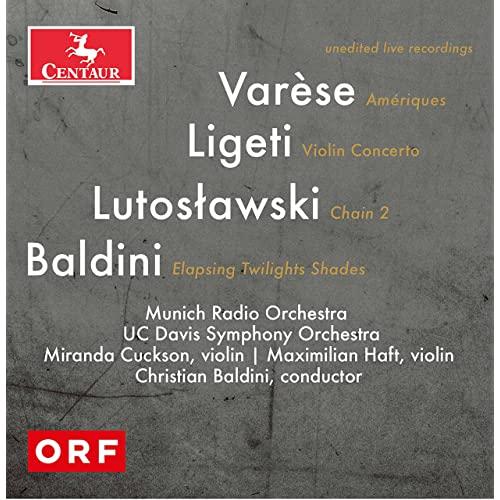 The album is now available on your favorite music streaming service, as well as for purchase.

The album opens with Baldini’s own composition Elapsing Twilight Shades, performed by the Munich Radio Orchestra (at the renowned Salzburg Festival), which introduces the listener to a symphonic soundscape that might be described as kaleidoscopic, contrasting, and sometimes also humorous. The album ends with Amériques by the French-American composer Edgar Varèse, who drew inspiration from the “urban jungle” of New York City in the 1920s, complete with a fire department siren and 14 percussionists.

The album features two major works for violin and orchestra by György Ligeti and Witold Lutosławski. The Ligeti violin concerto is performed on the album by Miranda Cuckson, who is “one of the stars of the new music scene in New York” (Sequenza21). Ligeti’s writing makes use of microtonality and scordatura (atypical tuning) of violin and viola, and instruments unusual for orchestra that include recorders and ocarinas.

Maximilian Haft, a native of Sacramento who has resided in Switzerland for almost two decades, performs Lutosławski’s Chain II. In Chain II, the soloist and the orchestra are at times not entirely in sync with one another (as per the composer’s request). This is music that can and will sound differently every time it is performed, with fresh exchanges between rigorously notated music, and more deliberately free moments (chains) which alter the musical discourse.