Jeffrey Thomas, Professor of Music, is conductor of the UC Davis University Chorus, Alumni Chorus, and Chamber Singers. He joined the UC Davis faculty in 1996, was a recipient of a 2001–06 Chancellor’s Fellowship, is the first holder of the Barbara K. Jackson Chair in Choral Conducting, and was  awarded a Bellagio Residency by the Rockefeller Foundation to work on his manuscript Handel’s “Messiah”: A Grand Musical Entertainment.

Professor Thomas is also Artistic and Music Director of the American Bach Soloists and American Bach Choir, with whom he has directed and conducted recordings of more than 25 cantatas, the Mass in B Minor, the Musical Offering, motets, chamber music, and works by Schütz, Pergolesi, Vivaldi, Haydn, and Beethoven. He has appeared with the Baltimore, Berkeley, Boston, Detroit, Houston, National, Rochester, Minnesota, and San Francisco Symphony orchestras; with the Vienna Symphony and the New Japan Philharmonic; with virtually every American Baroque orchestra; and in Austria, England, Germany, Italy, Japan, and Mexico. He has performed at the Santa Fe Chamber Music Festival, Spoleto USA Festival, Ravinia Festival, Saratoga Performing Arts Center, Berkeley Festival and Exhibition, Boston Early Music Festival, Bethlehem Bach Festival, Gottingen Festival, Tage Alte Musik Festival in Regensburg, E. Nakamichi Baroque Festival in Los Angeles, the Smithsonian Institution, and at the Brooklyn Academy of Music’s Next Wave Festival, and he has collaborated on several occasions as conductor with the Mark Morris Dance Group.

Before devoting all of his time to conducting, he was one of the first recipients of the San Francisco Opera Company’s prestigious Adler Fellowships. Cited by the Wall Street Journal as “a superstar among oratorio tenors,” Thomas has an extensive discography of vocal music that includes dozens of recordings of major works for Decca, EMI, Erato, Koch International Classics, Denon, Harmonia Mundi, Smithsonian, Newport Classics, and Arabesque. Thomas is an avid exponent of contemporary music and has premiered song cycles of several new composers, including two cycles written especially for him. He has performed lieder recitals at the Smithsonian, song recitals at various universities, and appeared with his own vocal chamber music ensemble, “L’Aria Viva!”

Jeffrey Thomas, professor emeritus, and the American Bach Soloists were honored by the website SF Classical Voice as winners in their annual Best of the Bay series.

UC Davis Professor of Music and Conductor of the University Chorus Jeffrey Thomas leads the chorus one last time before his retirement after 22 years.

ABS Artistic and Music Director Jeffrey Thomas earned star status with his peerless work on the podium. The suites (like other Baroque works) can turn busy and dutiful when they’re played too much for speed and showiness.

Conductor Jeffrey Thomas, a longtime member of the UCD music faculty, will lead the performance of the Schubert Mass in G, which was composed early in Schubert’s all-too-brief career… The program also includes two orchestral works by English composer Elgar, both of which will be conducted by doctoral candidate Jonathan Spatola-Knoll.

Classical works that were inspired by humanity and nature form the basis of the UC Davis Symphony Orchestra’s concert on Sunday, Nov. 5. Jeffrey Thomas, Barbara K. Jackson Professor of Music and director of the American Bach Soloists, will conduct.

Best of the Bay, San Francisco Classical Voice’s annual reader poll, has honored the American Bach Soloists, under the director of UC Davis’ Jeffrey Thomas, with two awards this year.

ABS won in the categories of Best Early Music/Baroque Ensemble and Best Festival for their American Bach Soloists Summer Festival and Academy.

The UC Davis Symphony Orchestra, University Choir, Alumni Choir, and the community-based Davis Chorale will be featured together in a concert on Sunday, March 13, at 7 p.m. at the Mondavi Center, which will include a performance of the Symphony No. 9 of Ludwig van Beethoven, as well as shorter works by Beethoven and W.A. Mozart. It will be a big event, with nearly 200 singers and a large orchestra on stage.

From their annual summer festival to their subscription series of concerts, American Bach Soloists has made an impact on the early vocal music scene in the Bay Area. So it’s no surprise the group won this category with 51.21% of the vote, followed by Schola Cantorum (31.76%) and the International Orange Chorale of San Francisco (17.03%) — also fantastic choral performers.

Just because a group invokes Bach in its very name doesn’t mean there isn’t room for it to explore the music of other composers. The American Bach Soloists proved the point on Thursday with a grand, and even grandiose, account of a little-known operatic gem of the French Baroque, Marin Marais’ 1709 opus Sémélé….

Richard Cionco and the UC Davis University Chorus will be featured in Beethoven’s Choral Fantasy — a work dating from 1808. The 18-minute piece include some musical material that would later appear (in different and grander form) in Beethoven’s Ninth Symphony in 1824.

Baritone Mischa Bouvier was vocally and dramatically larger than life as the bumbling giant and murderous monstrosity that Polyphemus is. His gruesome act of crushing Acis under a stone leads to one of the baroque’s saddest musical moments, in which the chorus sings, unaccompanied, “Ah, the gentle Acis is no more,” and the members of the excellent ABS chorus, for just a moment, managed to bring time to a standstill.

Jeffrey Thomas graduated from Juilliard in 1981 with a focus in vocal performance. Edward Sien interviews Jeffrey Thomas, looking back.

Under the direction of Jeffrey Thomas, the American Bach Soloists today announced the release of an all-Handel album featuring soprano Mary Wilson. The works on the album are: 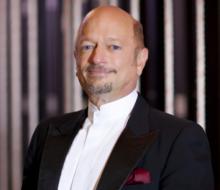