Garrett Rigsby is a conductor based in Kansas City, Missouri. He is currently the Assistant Conductor of the Conservatory Orchestra and Chamber Orchestra at the University of Missouri–Kansas City’s Conservatory of Music and Dance. He has conducted fully staged productions with the UMKC Opera Theatre. He recently was the Barbara K. Jackson Fellow in Conducting at the University of California, Davis where he served as the Assistant Conductor of the UC Davis Symphony Orchestra and UC Davis University Chorus and Alumni Chorus. He has also been the Assistant Director and interim Artistic Director of the Davis Chorale. An advocate of contemporary music, Rigsby has conducted several premieres and has served as the Principal Conductor of Pacific Arts Contemporary Ensembles (P.A.C.E). 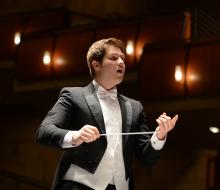