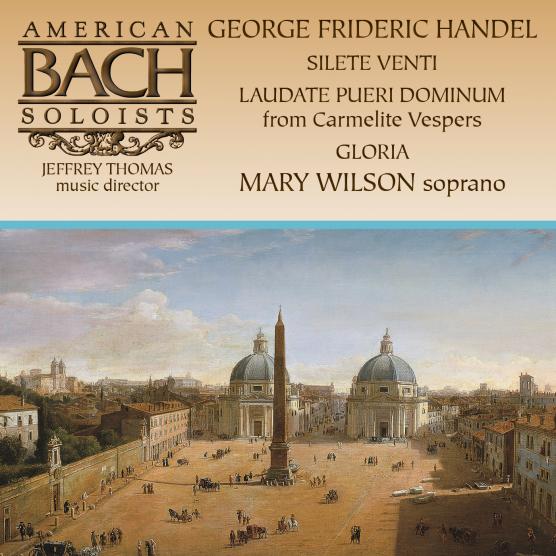 Under the direction of Jeffrey Thomas, the American Bach Soloists today announced the release of an all-Handel album featuring soprano Mary Wilson. The works on the album are:

The album represents the 19th of an accomplished collection of recordings Jeffrey Thomas and the ensemble has made in its 25-year history. Those recordings include Beethoven’s Ninth, Corelli concerti grossi, Handel’s Messiah, and many iconic works by the American Bach Soloist’s namesake composer.

From the press release:

“Handel: Laudate pueri Dominum” features three challenging works for soprano and chamber ensemble that place extraordinary demands of virtuosity and expressiveness on soloist and orchestra alike. Written in 1707 when the composer was living in Italy, Laudate pueri Dominum is a startling example of Handel’s ability to absorb and make use of foreign traditions to fuel his unique vision and compositional voice. The psalm setting is a veritable catalogue of Italian musical forms, all masterfully employed by Handel.

The Gloria for coloratura voice, two violins, and basso continuo is also from Handel’s early period. Discovered in 2001, this exquisite liturgical work is at times expansive and elegant, but its vigorous sections for the soprano soloist are what often amaze hearers. The composer’s thrilling virtuoso motet Silete venti (“Silence, ye winds”) comes from later in Handel’s career when he was living in London and writing operas for the lyric stage. Opening with what appears to be a typical French ouverture, the soprano makes her entrance in the work by bidding the winds—elemental and instrumental—to be silent so her Christian soul can peacefully enjoy its repose.

In May 2013, Wilson’s performances of Silete venti with ABS astonished audiences with the breathtaking ease and precision of her singing. Maestro Thomas was commended for programming the overlooked gem with an ideal interpreter like Wilson: “Silete venti is a wonderful work, and the fact that it is a misfit for modern-day concert programs makes its absence from the repertoire a shame. Thank goodness for ABS!” (SFCV)