An alumnus of the Juilliard School, William David Cooper has enjoyed a diverse career as composer, conductor, and keyboardist.His music has been championed by Augustin Hadelich, the Juilliard Orchestra, Trio 180, the JACK Quartet, and the Lysander Trio, and has been performed at the Radio France Festival and the Wellesley Composers Conference. He has recently been commissioned by Soli Deo Gloria, and is currently writing Hagar and Ishmael, a two-act opera, that will premiere with members of the Indianapolis Symphony Orchestra. In addition to positions on faculty at Purdue and Vincennes Universities, he founded the choral department at Ben Davis University and has been on composition faculty at the Interlochen Arts Camp since the summer of 2010.

Cooper received ASCAP awards in 2004 and 2007, and the 2012 Leo Kaplan Award, the highest prize awarded in the ASCAP Morton Gould awards. A passionate devotee of early music, he was the recipient of the 2012 David S. Saxon award from the UC Davis music department for excellence in performance of early music. Cooper has served as choir director, organist and chorister in churches including Holy Trinity Lutheran Church in New York City and First Baptist Church of Lafayette, IN, and is currently director of music at the Episcopal Church of St. Martin, Davis. His teachers have included Samuel Adler, Robert Beaser, Kurt Rohde, and Ross Bauer, and he has studied organ with Paul Jacobs. He is pursuing a Ph.D. in music composition at UC Davis, studying composition with Pablo Ortiz, and conducting research on English Renaissance music with Jessie Ann Owens.

“Hagar and Ishmael,” a new opera, was recently produced in Indianapolis.

The Empyrean Ensemble will present the second concert in its Young and Restless series on Monday, June 1, at 7 pm in the Vanderhoef Studio Theatre at the Mondavi Center.

Given to “composition students of great promise,” William David Cooper is among six composers that will receive a $7,500 Charles Ives Scholarship from the Academy of Arts and Letters. The awards were announced as part of the 2014 awards for sixteen composers.

The Gould awards were established in 1979 in memory of composer (and previous president of ASCAP) Morton Gould. The award gives cash prizes to young composers each year, totaling $40,000. The Avid company also gives each award recipient a copy of the latest Sibelius notation software. 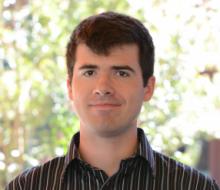