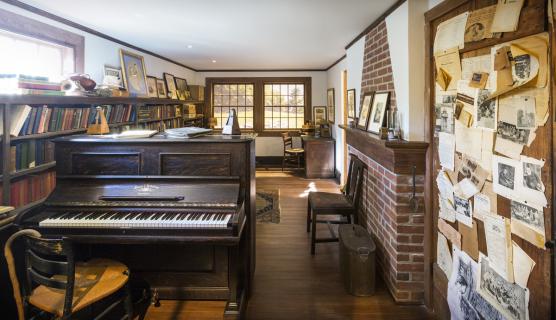 Given to “composition students of great promise,” William David Cooper is among six composers that will receive a $7,500 Charles Ives Scholarship from the Academy of Arts and Letters. The awards were announced as part of the 2014 awards for sixteen composers.

The American Academy of Arts and Letters was founded in 1898 to “foster, assist, and sustain an interest in literature, music, and the fine arts.” Each year, the Academy honors over 50 composers, artists, architects, and writers with cash awards ranging from $5,000 to $100,000. Other activities of the Academy are exhibitions of art, architecture, and manuscripts; purchases.

The modernist composer Charles Ives (1874–1954) was elected to the Academy in 1946. In 1969, his widow, Harmony Ives, bequeathed to the Academy the royalties to his music. Since then, royalty income has funded over 250 scholarships and fellowships in music composition, including the Ives Living, which gives a promising talent $100,000 a year for two years.

In March, 2014, the Academy opened the recreated Charles Ives studio in Redding, CT, to the public at the galleries of the American Academy of Arts and Letters in New York City.

An alumnus of the Juilliard School, William David Cooper has enjoyed a diverse career as composer, conductor, and keyboardist.His music has been championed by Augustin Hadelich, the Juilliard Orchestra, Trio 180, the JACK Quartet, and the Lysander Trio, and has been performed at the Radio France Festival and the Wellesley Composers Conference. He has recently been commissioned by Soli Deo Gloria, and is currently writing Hagar and Ishmael, a two-act opera, that will premiere with members of the Indianapolis Symphony Orchestra. In addition to positions on faculty at Purdue