Laurie San Martin writes music that creates a compelling narrative by exploring the intersection between texture and line. Critics have described her music as exuberant, colorful, forthright, high octane, tumultuous, intricate, intense and rumbly. She writes concert music for chamber ensembles and orchestra but has also written for theater, dance and video. Her music has been performed across the United States, Europe, and Asia.

Recent accolades include an award from the American Academy of Arts and Letters in 2018, and a 2016 Guggenheim Fellowship. Past recognitions include a fellowship from the Fromm Foundation, the American Academy of Arts and Letters, League of Composers-ISCM, the International Alliance for Women in Music, and the ASCAP Morton Gould Young Composer’s Awards. As a composition fellow, she has attended the MacDowell Colony, the Montalvo Artist Residency, Yaddo, Atlantic Center for the Arts, Norfolk Contemporary Chamber Music Festival and the Composers Conference at Wellesley College.

Laurie holds a PhD from Brandeis University in Theory and Composition. She has taught at Clark University and is currently Professor and Chair of Music at the University of California, Davis. Her music can be found on the New Focus Recordings Label of Music from the Association for the Promotion of New Music (APNM), Left Coast Chamber Ensemble’s “San Francisco Premieres” CD, released in 2005 and a recent Ravello CD “Tangos for Piano” performed by Amy Briggs.

Professor Laurie San Martin, music department chair, and alumnus Josiah Catalan (Ph.D., music, ‘21) will have compositions performed at the Festival of New American Music at Sacramento State University on Nov. 9. Their works were commissioned and will be performed by Earplay, a Bay area-based chamber ensemble.

Professor Laurie San Martin, music department chair, has received a commission from the Barlow Endowment for Music Composition at Brigham Young University. San Martin’s commission will be for Ensemble Ari, a group of Korean American musicians in the San Francisco Bay Area.

The renowned conductor Michael Morgan has died at the age of 63 from complications arising from a kidney transplant a few short months ago. Maestro Morgan guest conducted the UC Davis Symphony Orchestra several times, the most recent of which was a concert featuring Saint-Saëns’s “Organ” Symphony in 2018.

UC Davis professor of music Laurie San Martin’s duo Zeppelin, for flute and cello, will be performed via livestream on Monday, April 5, 2021, at 5:30 pm Pacific Time, from the Hamel Music Center at the Mead Witter School of Music, University of Wisconsin. The program also includes works by David Lang, Lou Harrison, and Astor Piazzolla.

The Left Coast Chamber Ensemble begins its all-online concert season with a program titled Soft-Spoken. It features flutist and UC Davis lecturer in music Stacey Pelinka in Soft-Spoken, a world premiere from the multi-talented artist David Dominique, Zeppelin, a flute and cello duo by UC Davis professor of music Laurie San Martin, and Kurt Rohde’s (also a UC Davis professor of music) remixes of songs by Hildegard (Ave Maria) and Joni Mitchell (Blue), as well as trios by Beethoven and Albert Roussel.

The concert will include Beethoven’s Piano Concerto No. 4, with soloist and former Davis resident Andrei Baumann, and Christ on the Mount of Olives, and San Martin’s what remains, written for the UC Davis orchestra and chorus.

As part of the California Women Composers series, the new chamber music ensemble Earplay shared the premiere performance of Fray, written by Professor Laurie San Martin. The work, which was commissioned by Earplay, can be viewed on Earplay’s YouTube channel.

“[Professor] San Martin started the piece during a quiet composing retreat at Lake Tahoe in 2016 that was interrupted by ongoing news of gun violence. That charted the course for the piece.”

“I kept reaching for joy and humor, but there was all this noise happening behind it.” … “What it sounds like is very much a part of the process.”

Faculty and Student Works to Be Premiered in Bay Area

A work by UC Davis music department chair and professor Laurie San Martin with words by Lucy Corin, professor of English, will have its world premiere Nov. 18. “Witches” will be performed by the Left Coast Chamber Ensemble and the vocal ensemble Volti Nov. 18 in Berkeley and Nov. 19 in San Francisco.

On Saturday, April 30, the Camellia Symphony Orchestra, under the baton of music director and conductor Christian Baldini, will close its 53rd season with a concert titled “Magnificent Spirit” at 7:30 p.m. at the Sacramento City College Performing Arts Center.

Music professor Laurie San Martin has been awarded a John Simon Guggenheim Memorial Foundation Fellowship. The fellowship will provide funding for San Martin, who has taught at UC Davis since 2001, to do research and compose works for the San Francisco vocal ensemble Volti and New York’s Cygnus Ensemble.

Click here to read the complete article on the College of Letters & Science news page.

Music faculty members and husband and wife Sam Nichols and Laurie San Martin have known cellist David Russell for 20 years and they’ve been writing music for him nearly that long.

Nichols’ newest piece for Russell, “This Is Not a Toy For a Child,” will have its first performance by the UC Davis Symphony and Russell on Nov. 21. The concert is at the Robert and Margrit Mondavi Center for the Performing Arts at UC Davis.

Russell, Nichols and San Martin met while they were students at Brandeis University in the 1990s. They each have written three pieces for Russell, who is a lecturer in music at Wellesley College.

I heard a very nice concert by the UC Davis Early Music Ensemble last year.  “Very nice,” though, doesn’t begin to express what I heard this past Wednesday night at the Episcopal Church of St. Martin in Davis.  Under the leadership of its new director, Matilda Hofman, the Early Music Ensemble has been transformed into something that demands notice.

The program began with San Martin’s we turn in the night in a circle of fire. It is a four-movement double concerto for chamber ensemble and two exceptional violinists: Gabriela Diaz and Hrabba Atladottir. Steven Schick, the conductor and artistic director of SFCMP, describes the piece in terms of “textural and virtuosic rapport” between the violinists. Meanwhile, the composer herself explained that the title is a translation of a Latin palindrome.

On November 22, 2011, the Fromm Foundation at Harvard University announced Professor Laurie San Martin as one of twelve composers to receive commissions for a work to be performed in 2012–13. 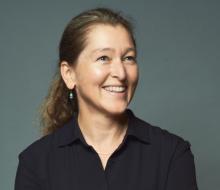