Beth E. Levy joined the Music Department at UC Davis in the fall of 2003, after spending one year as a Mellon Postdoctoral Teaching Fellow at the University of Michigan. She received her bachelor’s degree in music from Oberlin College, where she completed an honors thesis on chamber music in turn-of-the-century Boston. Her graduate study at the University of California, Berkeley, was supported by fellowships from the Mellon Foundation, the  American Musicological Society, Phi Beta Kappa, and Berkeley’s Townsend Center for the Humanities. In addition to teaching and giving guest lectures while at Berkeley, she was a visiting instructor at the University of Oklahoma School of Music (fall 1999).

Professor Levy’s dissertation research, on twentieth-century American composers and the mythology of the American West, has yielded journal articles in American Music (2001) and repercussions (1996) and conference papers presented at the national meetings of the AMS and the Society for American Music. She has been an active participant in the California chapters of the AMS, and was the winner of their 2000 Ingolf Dahl Competition. She has also given invited talks at UCLA and Bowling Green State University, and she has written program notes for the Berkeley Early Music Festival and the San Francisco Contemporary Music Players. Her book Frontier Figures: American Music and the Mythology of the American West (UC Press) was published in 2012. Her other interests include eighteenth- and nineteenth-century aesthetics, reception history, and representations of music in literature.

This course uses the music of Aaron Copland as a springboard for thinking about key issues in twentieth-century American music. Lectures will treat selected compositions of Copland and his contemporaries, exploring their musical materials and historical/cultural contexts including folk music, jazz, modern dance, and Hollywood film scores during the Great Depression, WWII, and the Cold War.

Professor Beth E. Levy to be Vice President of the Society for American Music

The Society for American Music has chosen UC Davis Associate Professor of Music Beth Levy as their Vice President. They have also elected members at large Mark Burford and Marian Wilson Kimber.

Her book Frontier Figures: American Music and the Mythology of the American West (UC Press) was published in 2012. Her other interests include eighteenth- and nineteenth-century aesthetics, reception history, and representations of music in literature.

Professor Beth Levy is among this year’s 10 Chancellor’s fellows. Each fellow receives a $25,000 award, and is recognized as a Chancellor’s Fellow for five years. 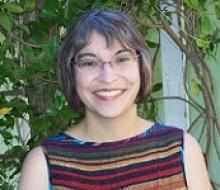