Luis “Tito” Talamantes holds a bachelor of professional studies in interdisciplinary music studies from Berklee College of Music and has been a Mariachi educator for Stockton Unified School District for over six years. His ensembles have been invited to the White House (2016), performed at the Kennedy Center for the Performing Arts (2018), and have placed in many national competitions.

Erik Peregrine (they/them/theirs) enjoys an active career as a conductor and educator, serving as the Director of Choirs and Lecturer in Music at UC Davis and as the artistic director of Ensemble Companio, an award-winning Northeastern regional chamber choir.

Percussionist Christopher Froh specializes in promoting and influencing the creation of new music through critically acclaimed performances and dynamic lectures. To date, he has premiered over 150 chamber and solo works by composers from 17 countries. His collaborations include some of the most significant composers of the twentieth and twenty-first centuries, including Chaya Czernowin, David Lang, Steve Mackey, John Adams, George Crumb, Liza Lim, Matthias Pintcher, and Keiko Abe.

California native Otto Lee is a saxophonist, educator, and composer. After completing a bachelor of arts degree in instrumental jazz performance (2010) and a master’s degree in music performance (2012) at California State University Fresno, he began his teaching career at CSU Fresno as well as Fresno Pacific University where he was in charge of the big band applied lessons. After spending a brief stint as the director of jazz studies at CSU Fresno, he decided to pursue a DMA in Jazz Studies from University of Colorado, Boulder (2017).

After coming to the United States over two decades ago, Rita Sahai continued her extensive music studies under the world famous sarod maestro Ustad Ali Akbar Khan, who passed away in 2009. Impressed by her talent and passion toward music, “Khansahib,” as she affectionately called her guru, gave her the title Gayan Alankar (Jewel of Music).

Sahai, an acclaimed composer, performer, and teacher, tours throughout the U.S., Canada, the U.K., and India. She is also in demand at recording studios at home and abroad, where she graciously lends her voice to many diverse musical projects, including contributing vocal tracks for Grammy Award-winning artist Béla Fleck and performing on Alonzo King’s Sacred Texts, a CD of international music that won the Isadora Duncan Award for music excellence. She has also collaborated on several live musical productions with Jennifer Berezan’s “Edge of Wonder” project. 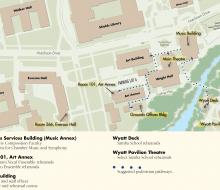 Music Buildings Wondering where Everson Hall is? The Music Annex?