After coming to the United States over two decades ago, Rita Sahai continued her extensive music studies under the world famous sarod maestro Ustad Ali Akbar Khan, who passed away in 2009. Impressed by her talent and passion toward music, “Khansahib,” as she affectionately called her guru, gave her the title Gayan Alankar (Jewel of Music).

Sahai, an acclaimed composer, performer, and teacher, tours throughout the U.S., Canada, the U.K., and India. She is also in demand at recording studios at home and abroad, where she graciously lends her voice to many diverse musical projects, including contributing vocal tracks for Grammy Award-winning artist Béla Fleck and performing on Alonzo King’s Sacred Texts, a CD of international music that won the Isadora Duncan Award for music excellence. She has also collaborated on several live musical productions with Jennifer Berezan’s “Edge of Wonder” project.

Rita Sahai truly serves as an ambassador of India’s rich musical heritage. Through workshops and lectures she has reached out to the larger non-Indian community and educated them in the intricacies of Hindustani music. She conducts classes all over the Bay Area, from Sacramento and Berkeley to Fremont and San Jose. Her students come from varied cultural and musical backgrounds.

Rita’s Western students discover a universal appeal and depth of emotion when singing classical ragas, and Rita’s classes are a way of reconnecting to the art and culture of their mother country for her Indo-American students. In March 2013 Rita Sahai was inducted into The Alameda County 2013 Women’s Hall of Fame and was recognized for her contributions to Culture and Art.

UC Davis Lecturer Rita Sahai has received a gold medals by the Global Music Awards for one of her songs, “Incessant Time—Samaya Nirantar,” from her recent album, Samaya Anubhuti—The Experience of Time. She was recognized in World Music and Female Vocalist categories.

Rita Sahai was among ten Indian-American achievers to be honored by the National Federation of Indian American Associations (NFIA), at its 18th biennial convention, which was held March 6–8, 2015, in Cerritos, California. The award given to Sahai was in the category of Liberal and Fine Arts. 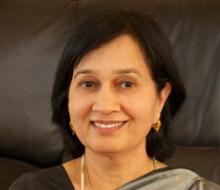