Peruvian-born mezzo-soprano Zoila Muñoz teaches voice on the faculties of UC Davis and California State University, Sacramento, and is artistic director of Apollo Opera in the Sierra Foothills.

In California, she has appeared frequently with Jeffrey Thomas and the American Bach Soloists and can be heard with them in recordings of Bach’s B-Minor Mass and Haydn’s “Lord Nelson” Mass. She has long been identified with the title role of Carmen, having sung the part in seven productions, from Regensburg and Metz to Boston and Walla Walla. Additionally, she has appeared in the major Monteverdi and Handel roles with Nikolaus Harnoncourt and Jean-Claude Malgoire. She has also sung some of the most delicious roles from the nineteenth and twentieth centuries, including the Rossini heroines Isabella and Rosina, Baba the Turk in Stravinsky’s The Rake’s Progress, and in Berlioz’s Béatrice et Bénédict, Gounod’s Mireille, and Delibes’s Lakmé. Muñoz holds degrees in vocal performance from the New England Conservatory and the Salzburg Mozarteum.

zoila[remove-this-and-replace-with-at]apolloarts.org
Back
This item appears in: 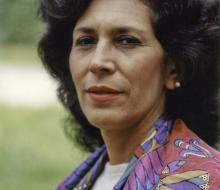