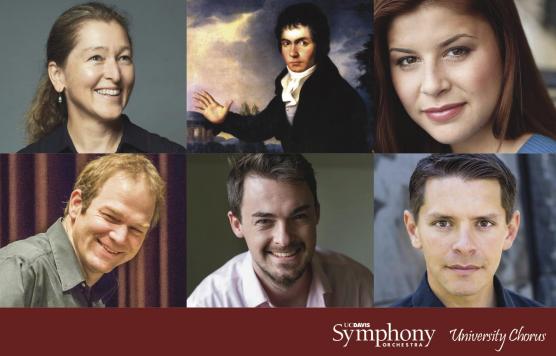 The concert will include Beethoven’s Piano Concerto No. 4, with soloist and former Davis resident Andrei Baumann, and his “Christ on the Mount of Olives,” op. 85, and San Martin’s “what remains,” written for the UC Davis orchestra and chorus. It is being conducted by Christian Baldini, associate professor and music director of the orchestra. The University Chorus is directed by Caleb Lewis, lecturer in music.

“I was delighted to have the opportunity to write for the chorus and the orchestra,” said San Martin, a UC Davis alumna. “Many of my students are in our music ensembles, and much of my own musical identity was shaped by my experience playing in similar groups — including the orchestra when I was an undergraduate at UC Davis.”

“Snyder’s ‘For the Children’ dwells on the beauty of nature, but it also hints at darker topics by ominous references to a possibly decaying environment,” San Martin said. “Armantrout’s ‘Riddance’ struck me with its animated and desperate message about our climate emergency.”

“While there is not a strict narrative to the way the music progresses, some of the passages depict clear images in my mind,” she said. “The giant orchestra chords colored by a twinkling celesta represent the greatness of earth. The whispering and noisy air sounds suggest uncertainty and anxiousness. The long gentle lines and chorales of the choir grow longer and more important as the piece progresses — perhaps leaving the most lasting image of the children and our future.”

San Martin (B.A., music, ‘91) has received commissions from many groups, and honors from the American Academy of Arts and Letters, League of Composers-ISCM, the International Alliance for Women in Music, ASCAP Morton Gould Young Composer’s Award and the Guggenheim Foundation. She holds a doctorate from Brandeis University in theory and composition.

Baumann has performed extensively in the U.S., Europe, Canada and Venezuela.

The UC Davis Symphony Orchestra is committed to presenting repertoire from different periods and styles at the highest artistic level. Members include undergraduate and graduate students, faculty, staff and community members. Established in 1959, the orchestra has performed in many cities in Northern California, as well as internationally.