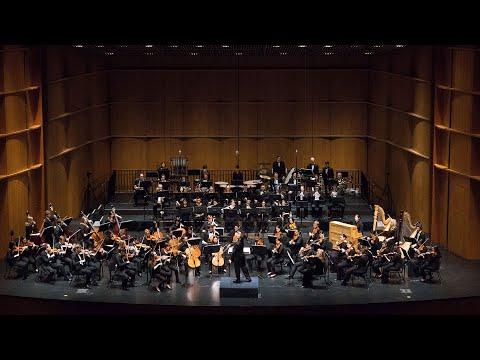 Colin McPhee’s “Tabuh-Tabuhan” is a groundbreaking 1936 piece for orchestra and two pianos incorporating Balinese melodies and rhythms into a Western symphonic structure. McPhee wrote the piece after four years in Bali as the first Western composer to study the music there. The orchestra will also perform the U.S. premiere of “Prélude à une nuit américaine” by Dutch composer Mathilde Wantenaar and Symphony No. 2 by Jean Sibelius.

Jennifer Reason is a vibrant young performer in consistent demand and the recipient of Sacramento Business Journal’s Top 40 under 40 Award for 2016. She gave her first solo recital at the age of five and acquired her first staff pianist position by age twelve. She has since gone on to appear in solo and ensemble performances across Europe, the United States, and Canada. A widely versatile and experienced musician, Jennifer is an adept pianist and vocalist in a variety of genres. Recently she completed her ninth international festival tour, twice appearing as a soloist to critical acclaim at the Interharmony International Music Festival in Germany, as well as at the Schlern and Orfeo International Music Festivals in Italy. She has also twice appeared in an ensemble setting at Carnegie Hall, as well as the Vatican, the Liszt Academy in Hungary, and the International Festival of Peace and Brotherhood in Italy. She received her bachelor’s of music degree in piano performance at California State University, Sacramento, with Steinway Artist Richard Cionco. She has developed a passion for collaborative performance and cofounded the nine-year-old modern chamber sextet Citywater, currently in residence at CSU, Sacramento.

Reason is artistic director of the Reconciliation Singers Voices of Peace, a sixteen-voice a cappella ensemble, which donates 100 percent of its proceeds to underfunded charities nationwide. She has also recently been appointed music director of the Rogue Music Project, a music collective formed to challenge current perceptions of opera through unpredictable, adventurous, and socially conscious performances. She has also acted as music director, vocal coach, and lead keyboardist for over 30 theatre productions, notably including the world premiere of Max Understood, a musical created to raise autism awareness (produced by Paul Dresher and directed by David Schweizer), and the Bay Area premiere and adaption of Disney’s Shakespeare in Love (Marin Theatre, directed by Jasson Minadakis).

This event has been archived and may contain content that is out of date.
Event
November 20, 2021 - 7:00 pm - 9:00 pm Christian Baldini
Mondavi Center, Robert and Margarit Mondavi Center for the Performing Arts, Mrak Hall Drive, Davis, CA
View map
Faculty Profile