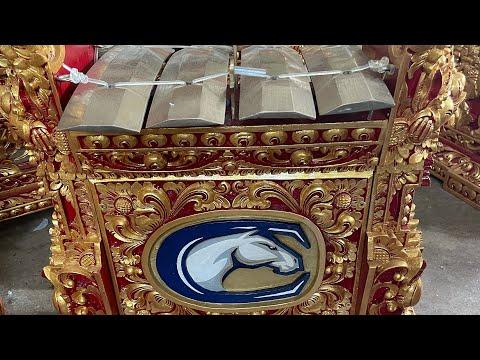 Register for the Conference

Free to attend. There are a limited number of in-person spaces available (please specify upon registration whether you plan to attend in person or not).

For the conference “Rethinking the History of Indonesian Music” six scholars will present 30-minute papers, followed by 10-minute prepared responses from local respondents, on topics related to the broad subject of music history in the geographical area currently identified as the Indonesian archipelago. The conference is part of a broader Luce Foundation project, titled “Toward a Music History of the Indonesian Archipelago,” which will take place over two years. With this open approach, the conference seeks to explore topics of indigeneity, colonialism, the evolving artistry of modern gamelan, and the rethinking of Indonesian history. The night before the conference there will be a traditional Wayang shadow puppet play, and the evening of the conference there will be a UC Davis Symphony Orchestra program that will include Colin McPhee’s Tabuh-Tabuhan (written in 1936 with Balinese music in mind).

9:00​ am • Session I: Recontextualizing Genres

9:00 am • ”The History of Seven Toned Gamelan in Bali”
—Wayan Dibia
Professor Emeritus of Dance
at the Indonesian Art Institute, Denpasar (streamed from Bali)​

9:30 am • Response by Dustin Wiebe (UC Davis) and general discussion

11:00​ am • “The In-Between, History and Mythology in Javanese Performing Arts”
—Sumarsam
Winslow-Kaplan Professor of Music at Wesleyan University

11:30​ am • Response by Benjamin Brinner (UC Berkeley) and general discussion

2:30​ pm • “Intersections of Ethnography and Historiography in the Constitution of Sound Archives from Indonesia”
—Barbara Titus
Associate Professor of Cultural Musicology,
University of Amsterdam

About the Luce Foundation Project

Starting in the 16th century and continuing until World War II, Christian missionaries to the Indonesian archipelago took an interest in indigenous music. Up until now the source materials have been difficult to find, scattered and ignored, but UC Davis professors Henry Spiller and Anna Maria Busse Berger have received a major grant from the Henry Luce Foundation’s Asia Program to investigate these sources and make these materials more accessible.

Spiller said: “It has been ignored because it was collected by missionaries and considered biased, but that’s throwing out the baby with the bathwater. We’re not trying to redeem the missionaries, but to make the priceless information they collected available to all interested parties.” The professors will focus primarily on work done by Dutch and German missionaries in the late 19th and early 20th centuries, although there are reports by Portuguese Jesuit missionaries dating to the 16th century.

The award to the College of Letters and Science’s Department of Music professors provides funding for research, two conferences, and a post-doctoral fellowship, which has been filled by Dr. Dustin Wiebe.

Most European missionaries were trained to learn about the languages of the places they were posted, and as an outgrowth of that, some began documenting music. This was boosted with the founding in 1900 of the Berlin Phonogramm-Archiv, which provided sound-recording equipment and training to missionaries and travelers.

This event has been archived and may contain content that is out of date.
Event
November 20, 2021 - 8:45 am - 5:00 pm Henry Spiller Anna Maria Busse Berger
Mondavi Center for the Performing Arts, Davis, CA
View map
Faculty Profile