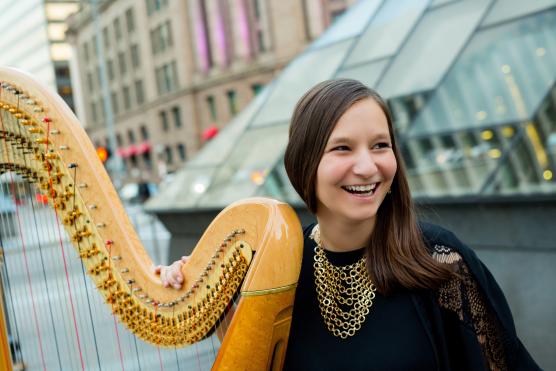 Aida Shirazi: Prisoner of the Sand

Harpist Jennifer R. Ellis (D.M.A. University of Michigan, M.M. Cleveland Institute of Music, B.M. Oberlin) is a dynamic contemporary performer who thoroughly enjoys defying traditional expectations about harp playing. It is in that spirit that she became the first harpist ever named a One Beat fellow–a cultural diplomacy program the U.S. State Department in conjunction with Found Sound Nation. She was also the first harpist to be accepted to Bang on a Can’s Summer Festival, Splice Institute for Electroacoustic Music, and the Fresh Inc. Festival. In addition to performing her own harp compositions, Dr. Ellis has worked with composers to perform over eighty premieres. A 2014 Atlantic Music Festival Future Music Lab fellow, she was a founding member of the Admiral Launch Duo, OINC, and Seen/Heard Trio and was selected to accompany Stevie Wonder at the opening of Oberlin’s new jazz building.