Sarah Wald was born in Chicago. She attended Columbia University in the City of New York for her bachelor’s degree in music with a focus in composition. While at Columbia, Sarah studied composition with Tristan Murail and Arthur Kampela, as well as with Robert Lombardo in Chicago. She also studied flute with Sue Ann Kahn. Sarah then studied with Conrad Susa and David Garner at the San Francisco Conservatory of Music for her master’s degree in composition. For her master’s thesis, she composed and produced Elegy for a Lady: a Music Drama in One Act.

Sarah has also received several honors, awards, and commissions. She graduated from Columbia magna cum laude and also received Columbia’s Rapaport Prize in 2012. In 2014 and 2016, she was a finalist in the ASCAP Morton Gould Young Composer Awards. In 2015, she was awarded professional development grants from the Illinois Arts Council Agency and Chicago’s Department of Cultural Affairs and Special Events. Her percussion quartet, Pas de Quatre, was selected by the University of Tennessee Knoxville for performance at PASIC 2015’s New Literature Showcase Concert. Sarah has also received several individual commissions as well as commissions from Access Contemporary Music, the University of Tennessee Martin Contemporary Music Group, and the Saint Xavier University Flute Choir.

Graduate student composer Sarah Wald will have her 2017 Percussion Trio performed at 5:00 pm Pacific on April 12 via YouTube. The trio will be performed by Northern Illinois University’s Percussion Ensemble, which is directed by Greg Beyer. Greg is also the leader of Arcomusical and gave several first performances of UC Davis graduate student works earlier this year with Arcomusical.

The online premiere for Sarah Wald’s piece for horn and cello, Overboard, will be streamed via the Bowdoin International Music Festival website this Saturday.

The College of Letters and Science graduate student exhibition will include work by two doctoral students in composition and theory. The exhibition showcasing work by 29 graduate students in seven disciplines will take place online this year due to COVID-19. Sarah Wald is presenting her Rumination on ‘La Prima Vez’ (for solo flute), performed by Wald, and Meditation on ‘La Prima Vez’ (for piano four hands), performed by the piano duo ZOFO, along with the scores and program notes. The pieces are part of her dissertation collection of works based on Sephardic songs. Adam Strawbridge will present a video performance by ZOFO of his Ohrwurm, made up of ten variations of Bach’s chorale “O Ewigkeit, du Donnerwort” (BWV 20). 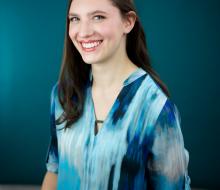