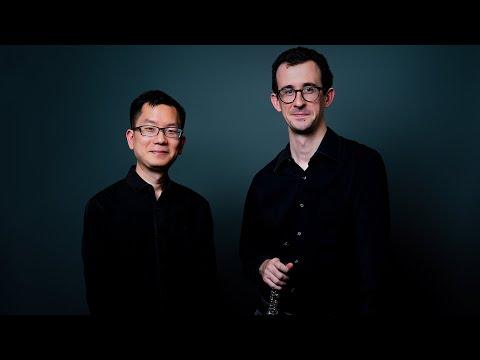 Duo Axis (Zach Sheets, flute, and Wei-Han Wu, piano) frequently collaborate with composers to create new works and foster a spirit of innovation and reciprocity. In this, their first of two programs while in residence at UC Davis they present a set of world premieres by graduate student composers at UC Davis. The second program takes place on Friday, April 8, at 7:00 pm, called “Duo@50,” which is a celebration of the 50th anniversary of a particular Aaron Copland duet.

Joseph Vasinda: Under Cover of Night

Dean Kervin Boursiquot: Speak for yo’ self!

As Duo Axis, flutist Zach Sheets and pianist Wei-Han Wu present vibrant performances that champion the thrilling potential of authentic duo playing and the unbridled possibilities of flute and piano collaboration. They frame their work as an open-ended question of how a troupe of two—trained as flutist and pianist—can make vivid and three-dimensional performances that emerge from conventional musical practice and go beyond it. Duo Axis frequently works closely with composers to create new works and foster a spirit of innovation and reciprocity. We establish long-term partnerships to create vivid and unique works well tailored to our artistic vision, while contributing meaningfully to our field’s ever-expanding body of exceptional repertoire.

Sought after for recitals and residencies, the duo has been presented by a wide range of institutions, including at the University of Chicago, the Creative Arts Initiative (Buffalo), University at Buffalo, Augustana University and the Knutson Masters Series (Sioux Falls), EQ Concerts (Boston), Æpex Contemporary Performance (Ann Arbor), Houston Flute Club (Houston), nth degree chamber series (Cape Cod), the Valencia International Performance Academy (Spain), and more. As individuals, they hold degrees from Eastman, Northwestern, University of Michigan, and Harvard, and have performed at the Tanglewood, Castleton, Aspen, and Spoleto Festivals.

Bryndan Moondy (b. 1994) is a composer and classical guitarist based in northern California. In his creative practice Bryndan seeks to engage the substance and materiality of sound while also exploring its metaphoric capacity.  His work frequently draws influence from the natural world as well as other mediums within the visual and literary arts. Bryndan has received degrees in composition from San Francisco State University (B.M.) and University of California Santa Cruz (M.A.).  His primary teachers have been Hi Kyung Kim, Ben Sabey, and Richard Festinger (composition); and Larry Ferrara (classical guitar).  Bryndan has had the pleasure of working with ensembles such as the Mivos Quartet, WasteLAnd, Vertixe Sonora, Elevate Ensemble, and Splinter Reeds; he has had his works performed and workshopped internationally at festivals including the Barcelona Modern Composition Course, June in Buffalo, Hot Air Music Festival, and April in Santa Cruz.