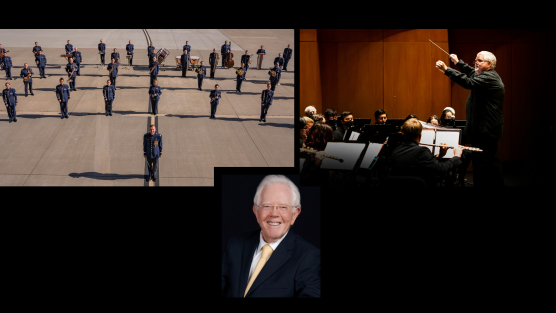 This concert program is being presented free to the public in memory of the longtime clarinetist and dedicated alumnus Bill Hollingshead, who passed away in 2021.

Written as a powerful sequel to Moscow, 1941, this work changes the narrative, where the theme from Moscow now represents the aggressor, and the heroic people of Ukraine are represented by the Ukrainian National Anthem and the powerful song Prayer for Ukraine.

William Grant Still: Africa, Land of Superstition from the Africa Suite
FIRST PERFORMANCE of this work transcribed for Concert Band

William Grant Still (who never went to Africa) said the Africa Suite was “designed as an American Negro’s wholly fanciful concept of the cradle of his Race, formed on the folklore of generations.” The work is the first of a trilogy focused on the subject of the African American experience.

Julie Giroux: Evening Snow at Kambara from Symphony No. 4 (“Bookmarks from Japan”)

Based on the bookmark “Evening Snow at Kambara” by Hiroshige Ando which is from the series The 53 Stations of the Tokaido Highway.

David Maslanka: Give Us This Day (Short Symphony for Wind Ensemble)

The words “Give us this day” are, of course, from the Lord’s Prayer, but the inspiration for this music is Buddhist. I have recently read a book by the Vietnamese Bhuddist monk Thich Nhat Hahn (pronounced “Tick Nat Hahn”) entitled For a Future to be Possible. His premise is that a future for the planet is only possible if individuals become deeply mindful of themselves, deeply connected to who they really are. While this is not a new idea, and something that is an ongoing struggle for everyone, in my estimation it is the issue for world peace. For me, writing music, and working with people to perform music, are two of those points of deep mindfulness.

USAF Band of the Golden West

Alan Silvestri: Back to the Future

The United States Air Force Band of the Golden West is stationed in the San Francisco Bay area at Travis Air Force Base, California. The only active duty Air Force band west of the Rockies, the Band of the Golden West is comprised of about 60 talented and versatile Airmen-musicians under the command of Major Joseph S. Hansen. In addition to performing for civilian communities throughout the states of California, Washington, Oregon, Arizona, and Nevada, the band supports 13 Air Force Bases, 8 Air Force Reserve Wings, and 6 recruiting squadrons in over 250 annual performances for 1.5 million listeners.

The Band of the Golden West has performed for gubernatorial inaugurations, with guest artists such as Marvin Stamm, Arturo Sandoval and Bob Hope, and for the fans of Oakland Athletics, San Francisco Giants, Oakland Raiders, San Francisco 49ers, and Infineon NASCAR races. In the last ten years the band has led off three Tournament of Roses parades in Pasadena, CA. In 2004, the USAF Band of the Golden West was honored to support the interment ceremony of President Ronald Reagan in Simi Valley, CA, an event, viewed by a global TV audience of over 400 million. More recent events include featured performances with the Los Angeles Philharmonic, San Francisco Symphony, the Hollywood Bowl Orchestra and Pentatonix.

Dr. Garrett Rigsby has been fortunate to have held an eclectic career as an educator and conductor, leading bands, orchestras, operas, choirs, and cutting-edge new music ensembles, among others. He currently serves as the Director of the UC Davis Marching Band at the University of California, Davis. He also directs the University Campus Band in the Music Department during Winter and Spring Quarters. Prior to his appointment at UC Davis, Dr. Rigsby served as an Assistant Conductor at the UMKC Conservatory in Kansas City, MO.