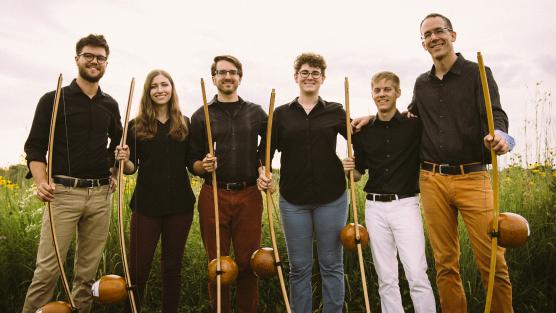 Jacob Lane: The Details of a Place

Projeto Arcomusical is a musics of the world sextet reimagining the Afro-Brazilian berimbau through unique and powerful chamber music. The ensemble formed in 2013 specifically to interpret MeiaMeia, the composition cycle co-composed by ensemble co-founders Gregory Beyer and Alexis C. Lamb. Arcomusical released MeiaMeia as its first album in 2016 on Innova Recordings. That same year Arcomusical received a Chamber Music America Classical Commissioning Grant that produced Roda, the kaleidoscopic, twenty-minute, four-movement work by Elliot Cole. Roda is featured on Arcomusical’s second album, Spinning in the Wheel now available on National Sawdust Tracks. MeiaMeia was under consideration for a 2018 Best World Music Album for the Grammy Awards.

What is a musical bow (berimbau)?

Although the berimbau is a well-known instrument in Brazil, most people in the United States are not familiar with its elegant beauty and simplicity. And people remain largely unaware of the diverse family of instruments to which the berimbau belongs. Musical bows are the most popular and widespread traditional string instrument found throughout sub-saharan Africa, and the berimbau made its way to Brazil via the transatlantic slave trade. The berimbau’s closest relatives are found in southern Africa in the Portuguese speaking countries of Angola and Mozambique, as well as in South Africa, Lesotho, Botswana, Namibia, Malawi, and just about every other country in the region. In Brazil, the pain and suffering of the enslaved African in the new world is deeply connected to the soul of the berimbau. Specifically in the practice of the body game known as capoeira, the berimbau is celebrated and honored as an icon of resistance against oppression. Furthermore, in the hands of inspired musicians such as Naná Vasconcelos (1944–2016) and Ramiro Musotto (1963–2009), the berimbau became the central vehicle for the creative exploration of new musical frontiers.

Today, Arcomusical honors both the tradition and the innovation of the berimbau’s past in every activity that supports the mission to spread the instrument’s message of joy and hope well into the future.

Free, online only, to be premiered via YouTube
a Shinkoskey Noon Concert

Paul Engle is a musician from Los Angeles, where he spent much of his musical life as a guitarist and songwriter. His formal music training began at Los Angeles City College with an emphasis in jazz guitar and composition. Paul holds a Bachelor of Fine Arts in Composition and Experimental Sound Practices from CalArts, where his teachers included Andrew McIntosh, Wolfgang von Schweinitz, and Marc Lowenstein. His recent works embrace nuanced differences of sameness and invite interactions of procedural austerity with will and intuition.

Jacob Lane is a composer, pianist, and educator who lives in Oakland, California. He is the pianist for the chamber groups Sl(e)ight Ensemble and Portato Portato. A member of The Music Teachers’ Association of California, Jacob teaches piano performance and music theory at The Alameda School of Music and New World Music Academy. Jacob holds degrees in music performance from Mills College in Oakland, CA (MFA), and Northern Vermont State University in Johnson, VT (BA).