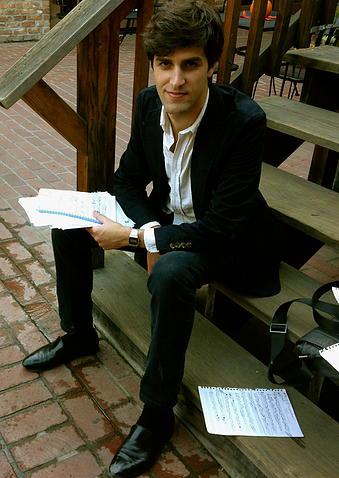 Ryan Suleiman was born to Lebanese and Mid-Western parents in California. His music engages with dreaming, the natural world, and the understated beauty of everyday life. His one-act chamber opera, Moon, Bride, Dogs, was described by the San Francisco Chronicle as “a gem” with “an aesthetic that is at once so strange and so accessible.” While his artistic interests vary, he seeks ways of conveying the simultaneity of beauty and dread that characterizes our times. This is the subject of his Piano Concerto (2020) and an interview series called “Reflections on Music and Nature,” available on YouTube.

Suleiman is a three-time Finalist of the ASCAP Young Composer Awards and two-time winner of the FeNAM Student Composers Competition. His music has been performed at several festivals, including SICPP (Boston), June in Buffalo (NY), and the NANOworks Opera Workshop (Atlanta) among others. In addition, he has worked on commissions and collaborations on chamber, symphonic, and operatic works with numerous groups, including West Edge Opera, Left Coast Chamber Ensemble, Daedalus Quartet, Ensemble Dal Niente, Symphony d’Oro, Citywater, and Rogue Music Project. His piano cycle, Under Moonlight, was recorded by Jai Jeffryes in his solo album, Amethyst, distributed by Naxos.

Ryan enjoys collaborating with both musicians and artists in other fields. Past projects include concert-length pieces such as Heartstrings, a work for piano quartet and dancers (choreographer Jacob Gutiérrez-Montoya), and The Red Velvet Violin, a multimedia work for narrator, puppets, and orchestra (director Angelo Moreno at Davis High School). His two sister operas, Moon, Bride, Dogs and Bones of Girls (story/libretto by Cristina Fríes), have received several performances in Northern California and in Georgia. Additional projects include an orchestral contemplation of fires in his native California called Burning, the Piano Concerto, and a new work for socially distanced soprano and chamber ensemble that explores collective feelings of isolation in the beloved poet Gibran Khalil Gibran’s “The Robin.”

Suleiman received his Ph.D. from University of California, Davis (Provost Fellowship) where his advisor was Kurt Rohde, and his B.M. from Sacramento State. He has taught as a lecturer at the Sacramento State School of Music and was an associate instructor at UC Davis, in addition to teaching composition and theory as a private instructor. Ryan resides in Boston with his wife/musical collaborator, Sakurako Kanemitsu, and several furry animals, where he teaches composition in-person and via Zoom. He enjoys long walks, good food, and the films of Hayao Miyazaki. More information available at www.ryansuleiman.com.

Ph.D. alumnus Ryan Suleiman (‘20), now an assistant professor of music at Berklee College of Music, Boston, has launched a podcast series, “Music and Nature,” which is affiliated with Landscape Music, a network of musical artists whose “mission is to deepen public appreciation of the natural world by providing a platform for contemporary composers and performers whose music engages with landscape, nature, and place.” Ryan’s own music compositions explore dreaming, the natural world, and the understated beauty of everyday life. The podcast builds off a couple of pilot episodes from 2020 and is available on your favorite podcast service.

In a continuance of the Bay Area’s West Edge Opera “Aperture” series, frequent collaborators and UC Davis alums Ryan Suleiman (Ph.D. music, ‘20) and Cristina Fríes (M.A. creative writing, ‘19) have once again received positive reviews for an excerpt of their new opera project, The School for Girls Who Lost Everything in the Fire.

Two UC Davis alumni are among 20 composer-librettist pairs preparing a new opera for consideration to be performed at West Edge Opera’s “Aperture” project. “Aperture” is an online performance space for new opera works, which launches in November of 2020.

Ryan Suleiman, composer (PhD, Music, ‘20), and Cristina Fríes, librettist (M.A., Creative Writing, ‘19), have titled their new work School for Girls Who Lost Everything in the Fire. The piece is a social tale about a group of orphaned girls finding the hope to rebuild their lives in a Catholic school in the aftermath of destruction amid mysterious phenomena.

Ryan Suleiman, a doctoral student in music composition at UC Davis, has long been concerned with the environment, nature and climate change. Over the past few years, Suleiman has written works titled Drought, Skies of Smoke and Burning. In the spring he reached out to other musicians to see what they had to say about music that explores the natural environment, with an emphasis on climate change, for a series of YouTube interviews.

The very title of “Moon, Bride, Dogs,” an eerily beautiful new chamber opera by composer Ryan Suleiman and librettist Cristina Fríes, serves as both the cast of characters and a hint at the piece’s terse M.O. There’s nothing in this 20-minute opus that doesn’t need to be there, but it covers plenty of ground in just a few deft strokes.

West Edge Opera’s “Snapshot” Festival program was comprised of four short operas, including UC Davis Graduate student Ryan Suleiman’s Moon, Bride, Dogs, which was set to a libretto by UC Davis graduate student in creative writing Cristina Fríes. The work was originally premiered at UC Davis in May 2018 by the Brooklyn Art Song Society along with five other pieces for voice and piano in collaboration with the Program in Creative Writing.

“After three years, a writer and a composer’s collaboration will debut in Sacramento” Sacramento Bee

Two versions of a miniature opera by Ryan Suleiman, a doctoral student in music composition and theory, and Cristina Fríes, who earned an M.A. in creative writing from the English department, will have performances in Sacramento, Berkeley and San Francisco this month.

Graduate student Ryan Suleiman’s short opera Moon, Bride, Dogs will be performed twice in a partnership with Bay Area new music ensembles EARplay and West Edge Opera called “Snapshot.” His opera is written to a libretto by UC Davis graduate student in creative writing Cristina Fríes and was premiered at UC Davis in May 2018 by the Brooklyn Art Song Society along with five other pieces for voice and piano in collaboration with the Program in Creative Writing.