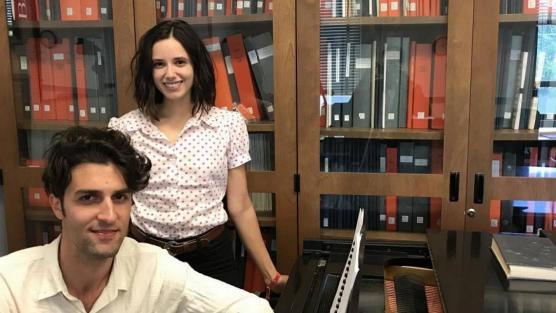 Two versions of a miniature opera by Ryan Suleiman, a doctoral student in music composition and theory, and Cristina Fríes, who earned an M.A. in creative writing from the English department, will have performances in Sacramento, Berkeley and San Francisco this month.

A 20-minute version, titled “Moon, Bride, Dogs,” will be performed by contemporary music group EARplay and West Edge Opera on Jan. 31 in Berkeley and Feb. 1 in San Francisco.

In the work, a lost princess has fallen from the sky into an unknown land, escaping the clutches of her abusive father only to be pursued by hungry dogs and ridiculed by a dispassionate moon. The work grew out of an ongoing collaboration between the English department’s creative writing program and the music department’s composition program. It was premiered at UC Davis in early 2018 by the Brooklyn Art Song Society and also had a semi-staged production at the North American New Opera Workshop in Atlanta in early 2019.

The Sacramento production, for singers and piano, will be the first full staging. It is being directed by Omari Tau, features soprano Claire Hennessy as the princess, and will include the use of actors/puppeteers.

The West Edge and EARplay performance will include singers, piano and string ensemble. It is part of the West Edge Snapshot series, which presents new operas in an informal concert setting, and will be one of four works on the program.

Suleiman, a native of Sacramento, was twice a finalist in the ASCAP Young Composer Awards. His music has been performed in festivals at the New England Conservatory of Music and Oregon Bach Festival Composers Symposium, and by Left Coast Chamber Ensemble, Calder Quartet and Ensemble Mise-en. The opera was his first foray into vocal music.

A native of Colombia, Fríes won the PEN/Robert J. Dau Short Story Prize for Emerging Writers, and her story “New Years in La Calera” was published in PEN America Best Debut Short Stories in 2018. She will spend much of 2020 in Argentina on a Fulbright Fellowship. She also holds a bachelor’s degree in English with a minor in art history from UC Davis.