His book, Italian Opera in the Age of the American Revolution (Cambridge University Press, 2011), is a study of representations of America in eighteenth-century comic opera, showing how new ideas coming from Revolutionary America inspired leading composers of the time, including Piccinni, Paisiello, Haydn, and Mozart, to introduce far-reaching innovations in the musical and dramatic fabric of Italian opera. The book received the Lockwood Book Award, conferred by the American Musicological Society.

His article “Mesmerizing Adultery: Così fan tutte and the Kornman Scandal” (Cambridge Opera Journal) tracked down the real-life scandal involving a banker, his wife, and her lover that inspired Mozart’s opera, and discusses the implications of this previously unknown source for the opera plot, in terms of representations of medicalization of sexuality as a way to exert a new technology of power engineered by the emerging bourgeoisie. The article won the 2004 Einstein Award, conferred by the American Musicological Society.

Polzonetti’s research on opera started in 1999, when he published the first essay on “gastromusicology”: the study of representations of food in opera and its meaning (“Feasting and Fasting in Verdi’s Operas,” Studi Verdiani). He is still presently working on this topic, having almost completed a book manuscript titled Opera & Food.

His other long-term research work is on eighteenth-century composer, theorist, proto-ethnomusicologist, and virtuoso violinist Giuseppe Tartini. His article “Tartini and the Tongue of Saint Anthony” (Journal of the American Musicological Society) won the 2015 Slim Award, and his first book on this topic, Tartini e la musica secondo natura (LIM, 2001), received the Latina International Prize in Music Studies. He is presently collaborating on a project for the publication of the critical edition of Tartini’s works led by the Università di Padova.

Professor Pierpaolo Polzonetti is the author of the recently published book Feasting and Fasting in Opera: From Renaissance Banquets to the Callas Diet. Published by the University of Chicago Press, the book is filled with engaging insights drawn from Polzonetti’s research about opera — from its origins as entertainment during 16th-century banquets to 20th-century opera star Maria Callas’s diet.

Pierpaolo Polzonetti Interviewed on BBC Radio about His New Book

Pierpaolo Polzonetti, Jan and Beta Popper Professor of Music, has been receiving media attention for his new book Feasting and Fasting in Opera: From Renaissance Banquets to the Callas Diet (University of Chicago Press, 2021). Recently he discussed the book on BBC Radio’s “Music Matters: Art centres, Giovanni Antonini, Opera and Food.”

Pierpaolo Polzonetti, the Jan and Beta Popper Professor of Music at UC Davis, has published a new book, Feasting and Fasting in Opera: From Renaissance Banquets to the Callas Diet, with the University of Chicago Press. Feasting and Fasting in Opera moves chronologically from around 1480 to the middle of the nineteenth century, when [Richard] Wagner’s operatic reforms banished refreshments during the performance and mandated a darkened auditorium 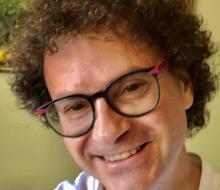