Sydney R. Charles, professor emerita, joined the faculty of the Department of Music in 1961 and retired in 1985. Her major fields of research include musical practice and theory, 14th- and 15th-century English music, and musical iconography. Charles was active in building the music collection at Shields Library, and she served as chair of the department from 1977 to 1980.

She published the books Josquin des Prez: A Guide to Research, The Music of the Pepys MS 1236, and A Handbook of Music and Music Literature in Sets and Series, and she published many articles in the New Grove Dictionary of Music and Musicians. She also was an editor of the journal Notes. Charles received her bachelor’s and master’s degrees from the Eastman School of Music and her Ph.D. from the University of California, Berkeley, in 1959. 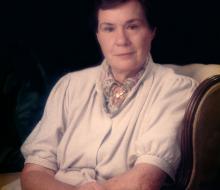