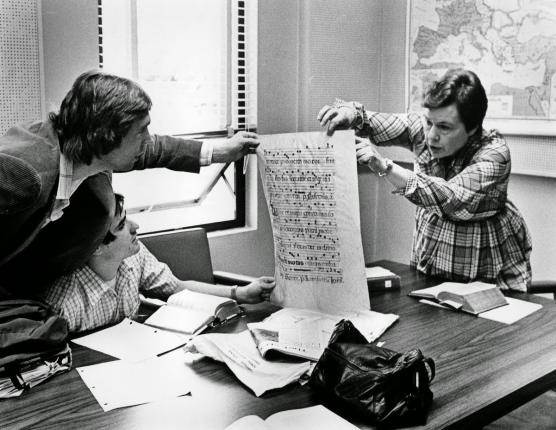 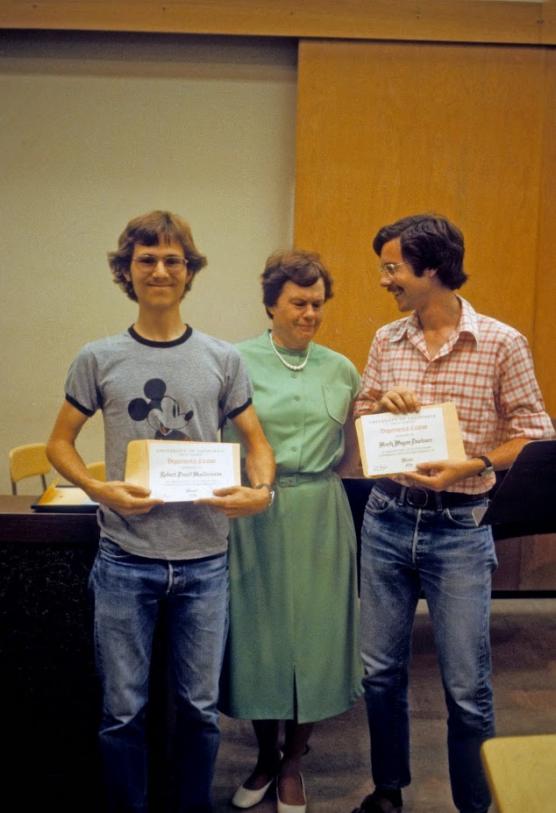 The musicologist Sydney Robinson Charles, professor emerita at the University of California, Davis, died November 20, 2014, in Hopkins, Minnesota, where she had moved to be nearer to her son, Gordon, his wife, Susan, and her grandchildren, William and Caroline. She served her entire musicological career (1961–85) on the Davis campus, where she was central in establishing musicology and its infrastructure, including the foundations for the Ph.D. degree inaugurated in 1989.

Sydney Robinson Charles was born in Cincinnati, Ohio, and grew up in Bloomington, Indiana. She attended the Eastman School of Music, where she earned bachelor’s and master’s degrees in violin. For a few months during World War II, she toured as a violinist with the Tommy Dorsey Orchestra; she taught briefly at Shorter College in Rome, Georgia, and Wells College in Aurora, New York.

Charles earned the Ph.D. in Music (musicology) from the University of California, Berkeley, in 1959 for a dissertation entitled The Music of the Pepys ms 1236. At Berkeley she had been research assistant to Manfred Bukofzer (1910–55) until his premature death. Hers was the eighth Ph.D. in music granted by the Berkeley campus and the second written by a woman.

At UC Davis, she was the fifth faculty member in the Department of Music and the first musicologist and first woman on the music faculty.

Her pathfinding research on the Pepys manuscript—i.e., Cambridge, Magdalene College, Pepys collection ms. 1236: 128 folios of black mensural notation of 117 individual composition from Kent, c. 1460)—led not only to the dissertation but to scholarly articles and a definitive modern edition published by the American Institute of Musicology in the series Corpus Mensurabilis Musicae (vol. 40, 1967). With her Berkeley teacher David Boyden she co-authored the pamphlet Musical Instruments in Paintings: an index to reproductions of fourteenth-century Italian paintings showing musical instruments (1961). Later there came a widely adopted textbook for graduate courses in music bibliography, A Handbook of Music and Music Literature in Sets and Series (1972, 2nd edn. 1979), and Josquin des Prez: a guide to research (1983). Charles was also active and sought after as a reviewer of the scholarly literature, particularly that concerning Renaissance manuscript study.

At UC Davis she established musicology as an academic discipline and, with her colleague Theodore Karp, framed the MA in music history (1966) and the Master of Arts in Teaching (1973) and oversaw the first nine graduate theses in these fields. Keenly interested in libraries, she led the transformation of the departmental record collection into a full-service resource, with a large collection of scores, reference works, and ancillary materials open to faculty and students on a walk-in basis; additionally she was for much of her career the academic liaison with UC Davis’s Peter Shields Library, just across the street, where she helped build, from almost nothing, a major research collection in music historical subjects. She also successfully championed the appointment of a music specialist to the staff of the main library,4 and particularly enjoyed seeing three of her students become noted music librarians. Additionally she served as music review editor for Notes, the journal of the Music Library Association (1974–77). On the occasion of her retirement, the Music Library was renamed the Sydney Robinson Charles Music Collection.

Sydney Robinson Charles was a career-long active member of the American Musicological Society, the glue—since she had eventually occupied all the offices—that held the Northern California Chapter together for over two decades.

In recollections of her tenure as chair of Music at UC Davis, she noted as major accomplishments purchasing the first nine-foot Steinway grand piano to be owned by the department; remodeling 115 Music, a classroom/rehearsal space, to accommodate public concerts including the venerable Thursday Noon Concert series; helping Albert J. McNeil establish what was then called “ethnic music” study; undertaking the long process of finding an appropriate home for the California Aggie Marching Band (housed until then in a locker room); and staff changes including the appointment of David Nutter in early music and of D. Kern Holoman as conductor of the UC Davis Symphony Orchestra. The Artists-in-Residence she appointed included the organist William Gudger, the violinist Rudolf Kolisch (in his last public appearances), and the beloved opera authority Jan Popper.

With Dorothy and Richard Swift she shared a passion for old heritage roses; their gardens, a few blocks apart, were noted showplaces in the spring and early summer, sought after by California rosarians; she passed this particular enthusiasm (and endless cuttings) on to her junior colleagues. She was an equally avid cat fancier and, later, assembled an impressive collection of stuffed bears (less trouble, she reasoned, than the cats). She was a devout Christian and churchgoer, basing many of the turning-point decisions of her life and career on the lessons of her faith. It says much about her that she wanted church to be the way it was when she first encountered it, with the King James texts, a fine choir, mighty pipe organ, and a congregation singing the great hymns, lustily and in four parts.

Sydney R. Charles, professor emerita, joined the faculty of the Department of Music in 1961 and retired in 1985. Her major fields of research include musical practice and theory, 14th- and 15th-century English music, and musical iconography. Charles was active in building the music collection at Shields Library, and she served as chair of the department from 1977 to 1980.

She published the books Josquin des Prez: A Guide to Research, The Music of the Pepys MS 1236, and A Handbook of Music and Music Literature in Sets and Series, and she published many articles in the New Grove Dictionary of Music and Musicians. She also was an editor of the journal Notes. Charles received her bachelor’s and master’s degrees from the Eastman School of Music and her Ph.D. from the University of California, Berkeley, in 1959.