David Granger currently resides in the San Francisco Bay area where he works as a freelance musician performing in orchestras throughout northern California.

He currently holds positions as principal bassoonist of the Sacramento Philharmonic Orchestra, the Modesto Symphony Orchestra, and is a member of the Oakland East Bay Symphony and Marin Symphony.

Born in Shawnee Mission, Kansas, Granger began studies at the age of eight on clarinet. His clarinet teacher, Michael Spielman, principal bassoonist of the Kansas City Philharmonic, encouraged his talented student to switch to bassoon at the age of thirteen.

After studying two years at the University of Kansas with Austin Ledwith, Granger received his Bachelor of Music in 1973 and his Master of Music in 1975 from the Manhattan School of Music in New York City. His teachers included Harold Goltzer of the New York Philharmonic, Elias Carmen, formerly of the NBC Symphony under Toscanini, and Stephen Maxym of the Metropolitan Opera Orchestra. In 1974 he won the school’s annual concerto competition and performed the Weber Concerto in F Major with the Manhattan School of Music Orchestra. From 1973 to 1977, Granger was a member of the prestigious National Orchestral Association, a training orchestra for young professionals that regularly performed in Carnegie Hall.

From 1975 to 1981, Granger worked in the busy freelance world of New York City, performing with a number of that city’s famous orchestras as well as pursuing an active chamber music career. He was a founding member of the Manhattan Woodwind Quintet, resident quintet at the C. W. Post Center of Long Island University and winner of the 1978 Artists International Competition. The ensemble made its Carnegie Recital Hall debut in 1979. In 1981 Granger commuted to Florida to play principal bassoon in the West Palm Beach Symphony Orchestra.

Granger attended Indiana University’s Early Music Institute and received a Performer’s Diploma in Baroque bassoon in 2004. In 2005 he founded Passamezzo Moderno, a period ensemble that performs the music of three centuries, from 1530 to 1830, and specializes in the virtuoso instrumental music of the seventeenth century.

Music major Matthew Rasmussen ‘20 will play the Weber Bassoon Concerto with the Solano Symphony Orchestra. He is one of three winners of the orchestra’s 2019 Young Artist’s Competition. Matthew is the principal bassoonist in the UC Davis Symphony Orchestra and studies with UC Davis lecturer in music David Granger. 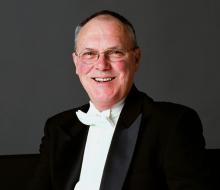