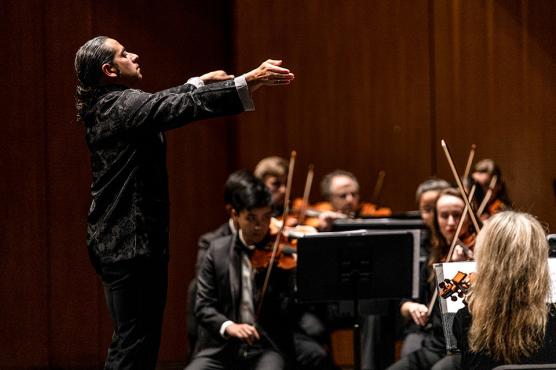 This program features Philip Glass’s popular first concerto for violin, with his iconic sound: open, full of motion, and yet without a lot of tonal changes. The soloist is Chase Spruill, who is a champion of Glass’s violin music. This contrasts with Tchaikovsky’s Fifth Symphony: regal and full of dueling themes, and which also features one of his best waltzes.

Philip Glass’s First Violin Concerto was his first piece written for the concert hall. Unlike many of his previous works—operas, film scores, and more—the piece is thrilling on its own without added audio-visual elements. The piece features a moving first movement, a romantic second, and a rousing finale that fades gently away like a wonderful memory. As the composer said in a biography, “I composed the piece in 1987 thinking, let me write a piece that my father would have liked. . . . A very smart nice man who had no education in music whatsoever, but the kind of person who fills up concert halls. They’re the people that keep the whole business going.”

Pyotr I. Tchaikovsky: Symphony No. 5

Tchaikovsky’s Fifth is—to borrow a phrase from Star Wars—a duel of fates. He half-attempted suicide only a year before by wading into the ice-cold Moscow River, hoping to catch a fatal illness. Tchaikovsky struggled with how he was viewed by the public (which he feared suspected his homosexuality), and his Fifth Symphony might reflect this struggle.

Winner of the Concerto Competition to be announced.

Violinist Chase Spruill has an international reputation as a performer of contemporary music, interpreting minimalist masters such as Philip Glass, Michael Nyman, and Henryk Gorecki. In 2020, BBC Music Magazine hailed his debut solo album of the music of British composer Michael Nyman, saying “Spruill plays with great spirit … and a great sense of presence,” and called him “an engaging and convincing advocate.” Also in 2020, Capital Public Radio called him, “a breathtaking performer” while MusicWeb International said, “Spruill plays with fire and yet sensitivity … and with absolutely secure rhythmic foundations.”

He was a core faculty member with the nationally celebrated Community MusicWorks organization in Providence, Rhode Island, from 2012 to 2017, and was a visiting professor of violin and orchestral studies at Wheaton College from 2015 to 2017. Dedicated to exploring potential intersections between music and social justice, Spruill returned to his hometown of Vacaville to develop and run the music program at the new school Sierra Vista (K–8) where he remains on faculty. He’s collaborated with other notable artists such as the Kronos Quartet, composer and electric guitarist Steven Mackey (B.A. music ‘78, UC Davis), and the BAFTA-nominated composer Brian Reitzell, releasing music from the critically acclaimed television series Hannibal. His recordings appear on the Philip Glass record label Orange Mountain Music and on Supertrain Records.