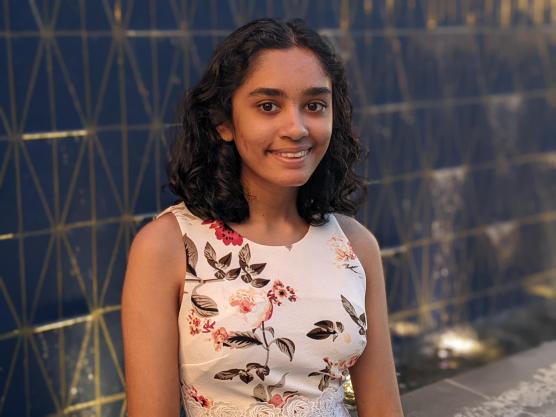 Undergraduate music major (focusing on vocal performance) Tiara Abraham has won second place in the Sacramento Master Singers Youth Scholarship competition. For it she sang one of only a few Vincenzo Bellini art songs, ”Per pietà, bell’idol mio,” in the collegiate category, age 20–22.

A Regents Scholar and a University Honors Program scholar, and at 16-years-old, one of UC Davis’s youngest graduating students, Tiara has more than made up for performance opportunities that were not available because of the pandemic. Just as an example, Tiara recently performed opera arias by Verdi, Mozart, and Donizetti with the Camellia Symphony Orchestra in Sacramento, where UC Davis Professor of Music Christian Baldini is the conductor. She has also been a member of the UC Davis Chorus and Chamber Singers and has been studying voice with UC Davis lecturer in music Jonathan Nadel.

Further, she has been singing with Sacramento’s Schola Cantorum and has competed here and abroad extensively. Earlier this year, she won an Honorable Mention YoungArts Award in Classical Voice, and in 2021 she won the Grand Prize from the Enkor International Music Competition, to name a few. Also in 2021, she participated in three summer intensive workshops at Oberlin, NYU, and Eastman.

Of the twelve competitive schools Tiara was admitted to, including the Manhattan School of Music and Peabody Conservatory, she has chosen to pursue a graduate degree at the Jacobs School of Music at Indiana University, Bloomington. She is particularly interested in IU’s renowned opera program.

G.F. Handel: “I know that my Redeemer liveth” from Messiah

Ricky Ian Gordon: Will There Really Be a Morning

Lori Laitman: “If I” from Four Dickinson Songs

Tiara is studying with Jonathan Nadel.