Bassist, teacher, and conductor Thomas Derthick is currently principal bass of the Sacramento Philharmonic, Opera, Ballet, and Choral Society, and recently served 25 years as principal of the Cabrillo Festival, America’s foremost Contemporary Music Festival. He frequently performs with the Chamber Music Society of Sacramento and has recorded and toured with the Empyrean Ensemble. Derthick has performed with the San Francisco Symphony, San Francisco Opera, San Diego Symphony and Oregon Symphony, as well as recording work and Broadway shows. A quarter-century of service to his fellow professional musicians culminated in his 2006 election as Vice President of the Professional Musicians of Central California, AFM Local 12.

Professional solo appearances include the Bottesini Grand Duo Concertante on multiple occasions; Bottesini’s Concerto No. 2 with the orchestras at Pacific and Sacramento State; and the Koussevitsky Concerto with the Solano Community Symphony Orchestra. Derthick recently performed bass recitals for full houses in Sacramento, Davis and Stockton, and the Koussevitsky Concerto with the UC Davis Symphony Orchestra in May, 2016.

A faculty member at Sacramento State University and UC Davis since 1982, Derthick joined the faculty at the University of the Pacific Conservatory of Music in 1988, where he has appeared as a guest conductor. Many of his former students have found placement in major graduate conservatories, as well as in major and regional professional orchestras.

Now in his sixteenth season as Music Director of the Central Valley Youth Symphony, Derthick has led the orchestra in expanding its performance schedule, enrollment, and community outreach. He began its annual and highly successful concerto competition and collaborations with the Stockton Symphony; and twice taken the orchestra to Carnegie Hall. Derthick also served as Interim Music Director of the Modesto Symphony Youth Orchestra in 2007–08, leading their first performance in the Gallo Center for the Arts.  Derthick recently guest conducted the Sacramento Philharmonic in its Link Up Performance for Spring 2015, and has also guest conducted the San Joaquin County High School Honor Orchestra, the CMEA Capital Section Junior High School Honor Orchestra, and the Tracy Unified Schools Honor Orchestra. Derthick was honored as Outstanding Arts Educator in Music for 2014 by the Stockton Arts Commission.

The Chamber Music Society of Sacramento will highlight the double bass — an instrument that often plays a background role in classical music — as the group hosts bassist Thomas Derthick at 7:30 p.m. Saturday, Oct. 24, at Congregation Bet Haverim, 1715 Anderson Road in Davis.

Derthick is principal bass of the Sacramento Philharmonic, Sacramento Ballet and Sacramento Choral Society. He frequently performs with the Chamber Music Society of Sacramento and has recorded and toured with the Empyrean Ensemble of UC Davis.

“We’re excited to get back to work,” said Larry Gardner, president of American Federation of Musicians Local 12, which represents the orchestra members. “Here, you’ve gone from no momentum to something. That’s good for us, and it’s good for the community.”

Friday, April 10, 2015, at 10:15 and 11:35 am, at the Community Center Theater, Sacramento. Sacramento Philharmonic musicians perform with soprano Carrie Hennessey and Sacramento-area elementary school students—part of the Link Up program sponsored by Carnegie Hall. 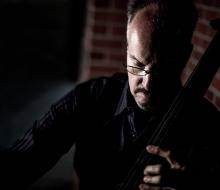