Richard Swift was a noted composer and one of the founding editors of the UC Press journal 19th-Century Music. In the 1970s he also served on the editorial board of this leading scholarly publisher. He earned his master’s in music composition at the University of Chicago in 1956, studying under Leonard Meyer and Leland Smith, and he taught at the University of California, Davis, from 1956 to 1991 where he was a pillar of the arts and humanities and established  the artist-in-residence program while serving as the Music department chair from 1963 to 1971. His music compositions encompass the traditional genres, including songs to texts by major poets in his acquaintance. He was a rigorous composer, a valued theorist, and a gifted teacher. 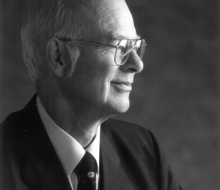