Jean-Paul Bourelly was born in Chicago to Hatian parents and grew up on Chicago’s South Side amid an unusual blend of Haitian meringue, folkloric, and hard-edged urban blues. Along with his own musical vision, which was inspired by Howlin Wolf, Jimi Hendrix, and even Carlos Santana, Bourelly began to formulate his unique musical style. At the age of eighteen, after a one-year scholarship studying with the great alto saxophonist and educator Bunky Green, he moved to New York City.

During his early years he worked with notable jazz figures like drummer Elvin Jones, Pharoah Sanders, AACM founder Muhal Richard Abrams, Roy Haynes and recorded with Miles Davis. Early notice includes being heavily featured on the Abrams release Blues Forever, which won DownBeat record of the year. He also made many collaborations with various members of a new generation of experimenters in genre-crossing music like Olu Dara, Henry Threadgill, Steve Coleman, and Graham Haynes.

From this formative stage, moving independently came naturally to him. He started his own group the BluWave Bandits. After the release of Blues Forever by Abrams and Cassandra Wilson’s Point of View (JMT), Bourelly quickly came to the attention of several record labels.

Jean-Paul’s early New York concept was based on expanding the borders of funk music by employing polyrhythms taken from sources far and wide. This assertive sound brought his music to the attention of the international press such as the New York Times, Straight No Chaser, Le Monde, and Melody Maker Magazine. Along with engagements at the original Knitting Factory and tours in Europe he was an important figure on scenes like the Black Rock Coalition and Mbase.

Reconnecting with Haitian musicians from the popular folkloric group Foula, he formed Ayibobo, which merged his Haitian and his jazz improvisational sensibility, a first sign of discovering his sound within an African space.

In Berlin, he renewed his focus on the sound that today may be called Afro Futuristic. This was affirmed by his collaboration with historian Paul Gilroy on the Black Atlantic project (Berlin HKW 2004). This work would take him toward a wider perspective, an ideal of a possible Black Atlantic sound, something that could encompass the totality of his style.

The group was formed from an urge to explore the mystical rhythmic and sonic ties that lie within the blood memory of the Black Atlantic experience and postindustrial culture. This quest opened a new context for his expressively bluesy guitar. Based off common themes of urban living between Dakar, Berlin, and New York, Boom Bop opened ears to a kaleidoscope of sound, more voluptuous, more daring than casual world music offerings of the time.

Since the establishment of his creative music hub JPGotMangos, it was possible to produce more music independently.

In 2012 he thought he was reaching back to his BluWave sound by forming Stone Raiders, Power Trio with Rolling Stones bassist Darryl Jones and Living Colour drummer Will Calhoun.

One can never really go back again and Stone Raiders stumbled, then surged forward when RoCking grooves, intersected with funky otherness at StoneRoc and Peavine. Truth to Power is the record. Check out the guitar burn on “Toxic U Love Episode II.” It also features the debut of eternally funky bassist Darryl Jones on vocals.

Jean-Paul continued to reveal Afro blues in abstract, deconstructing polyrhythms, while using analog as well as digitalized atmospheres, interrogating the new frontier of frequencies in electronic music with his musical laboratory Spontaneous Situation at the Werkstatt der Kulturen (2009-10), followed by several Spontaneous offshoots including the Spontaneous Youth Arkestra (2013) and his Music Talk show event The Spontaneous Townhall Meetings (2014, Ballhaus Naunynstrasse).

On his 2014 release of 3KINGS “Famous Guys,” Jean-Paul introduces a second dimension to his playing with rhythmic tapping. This rhythmic underpinning teased out from his seven-string guitar is navigating, subverting and finally transforms, otherwise traditional, Cameroonian High Life grooves.

Bey’s union with Bourelly, who is a lecturer in the College of Letters and Science’s department of music, initially occurred around the former “no man’s land” area of Cold War Berlin in 1999; the two met there and agreed on a collaboration. In the piece, the performers move through a landscape filled with atmospheric sound bites, punctuated by waves of guitar motion and commentary on today’s tumultuous world.

An analysis through sound, composition, participation and film documentation, the art forms, humanity and modernity of African American musics. Topics include: 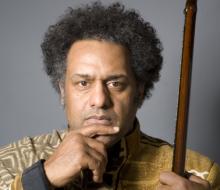