Jazz composer/arranger, saxophonist/woodwind player and music educator Jacam Manricks has been a highly respected figure among the New York City jazz scene for over thirteen years. Manricks has released highly acclaimed albums as a leader (Labyrinth, Trigonometry, Cloud Nine, Chamber Jazz, and GilManricks) and performed as a sideman on countless other releases.

His music has been highly commended in major music magazines, websites, and newspapers in the United States, Canada, France, Portugal, Italy, Ireland, Germany, Finland, Norway, Sweden, Estonia, Australia, and New Zealand. Manricks has given over 100 master classes on jazz composition and improvisation at internationally renowned institutions around the world and has presented fourteen international tours performing his original music with leading New York-based jazz artists.

The UC Davis Green Big Band will perform a jazz rendition of the operetta song  “Softly as in a Morning Sunrise” by Sigmund Romberg and Oscar Hammerstein II from the 1928 operetta “The New Moon” in a modern arrangement by Manricks. Also on the list are “Jazz Police” by Gordon Goodwin, written around 2003, and “Groove Merchant” by Jerome Richardson, written in the late 1960s and arranged by Thad Jones.

Double Dose of Jazz on Nov. 30

Experience an afternoon and evening of jazz at UC Davis on Thursday Nov. 30 when the College of Letters and Science’s Department of Music’s jazz bands perform two concerts at the Ann E. Pitzer Center.

A well-known jazz musician and professor at the University of California at Davis visited American River College on Thursday to discuss how students could succeed in the music industry in his lecture during a jazz clinic.

Jacam Manricks said that being a successful musician is more than just playing music. Manricks urged the students to not only think about the artistic side of music, but the business aspects of the industry as well.

The aim of this course is to teach students how to compose jazz style compositions and arrangements.  Past and present jazz styles will be explored.  Compositional techniques for writing melody in relation to harmony, as well as jazz rhythmical concepts, will be studied. Creating compositions with motivic continuity and balanced counterpoint will be other areas of focus. 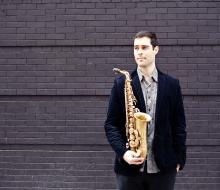