Traditional and New Music for Koto 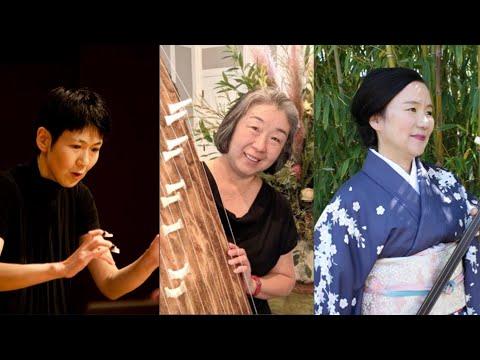 Hyo-shin Na: The Sky Was beyond Description for Koto and Bass Koto (2014)

Rokudan is a well-known piece in the koto repertoire. The literal meaning of Rokudan is “six sections” or “six steps.” All the sections in the piece have the same number of beats (except first section). It is believed by many that Yatsuhashi Kengyo (1614–85) composed Rokudan.

Jon Raskin (a Sacramento-based musician): in the blur of time, composition for improvisation (2018)

Shoko Hikage is a koto player currently based in Sacramento, California. Hikage began playing koto at the age of three. Her first teacher was Chizuga Kimura of the Ikuta-ryu Sokyoku Seigen Kai in Akita Prefecture, Japan. From 1985, she received special training from the second and third IEMOTO Seiga Adachi (hereditary head master of the Ikuta-ryu Sokyoku Seigen Kai). In 1988 Hikage graduated from Takasaki College with a major in koto music. She was then accepted as a special research student (uchideshi) in Sawai Sokyoku In (Sawai Koto Institute) under Tadao and Kazue Sawai, where she received her master’s certificate (kyoshi). Hikage also completed a one-year intensive seminar at the Sawai Sokyoku In. She moved to Honolulu, Hawaii in 1992 to teach koto at the Sawai Koto Kai Hawaii (Sawai Koto Institute Hawaii branch) and at the University of Hawaii. There she held her first American solo recital at the Honolulu Academy of Arts Theatre as part of the New Music across America Series. In 1997 she moved to San Francisco and has continued her career as an acclaimed koto performer and teacher. Hikage premiered Hyo-shin Na’s “Crazy Horse” for Korean Traditional Orchestra and Koto Solo with the National Orchestra of Traditional Instruments in Seoul, Korea in November 2011. In 2014 Hikage gave a solo recital with a program devoted to Hyo-shin Na’s music for koto/bass koto at Buam Arts Hall in Seoul, Korea. In 2017 Hikage organized historic concerts “Hengenjizai World of Koto Music” featuring two koto virtuosos, Soju Nosaka and Kazue Sawai, with Hogaku Journal and Hengenjizai Concert of the San Francisco Executive Committee. The concert was supported by Arts Council Tokyo and performed at Herbst Theater in San Francisco.

Michiyo Koga is a virtuoso koto, piano, and vocal artist who has been playing koto since childhood. She began her classical piano training at age five and voice training at fifteen. She received her Ikuta Koto Teacher’s license in 1970 and graduated from the NHK Japanese Ensemble Course in 1977. In 1979 she obtained her master’s degree at the Senzoku Gakuen University of Music. While in Japan she worked at the Japan Victor Company (JVC). She has toured Japan, Germany, and across the United States and has also recorded a number of soundtracks and albums. Her most famous was included in the “Ongaku Masters: An Anthology of Japanese Classical Music” released in Germany. She has performed with many artists and ensembles, including the Sacramento Symphony Orchestra and the well-known violinist Isaac Stern. For more information regarding koto lessons, performance for concerts, events, or special occasions, visit her website.

Naoko has been playing the koto since the age of six. She was taught by Koji Kikuhara, a highly ranked student of the National Living Treasure Hatsuko Kikuhara. In 1987 she passed a professional music examination at the Todo Music Association, which proudly claims more than 100 years of history. She studied classical singing with Ichijuro Kiyomoto and Fujima style dance with Monjuro Fujima from 1979 to 1981. Naoko has expanded her musical style studying biwa and obtaining a Shoden degree from the Chiluzen-biwa Nihon-Tachibana Organization in 2009. She has also studied the Nagauta style under Katsuroku Kineya since 2015 and has been performing Nogawa style jiuta shamisen and Ikuta style koto with shakuhachi player Elliot Kanshin Kallen as the Edo Ensemble.