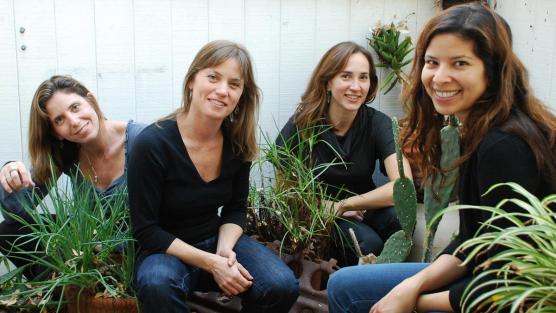 Eclipse Quartet is dedicated to the music of twentieth-century and present-day composers, with a special appreciation of women composers. The scope of their repertoire spans works by John Cage, Morton Subotnick, and Roscoe Mitchell, to Ruth Crawford, Kajia Saariajo, and Meredith Monk.

Sarah Thornblade is the associate principal second violin of the Los Angeles Chamber Orchestra. She is an avid chamber musician and a member of both the Eclipse Quartet (a new music string quartet) and X-tet. She has performed with Camerata Pacifica, and the Auros Group for New Music (Boston). Her playing has been described by the L.A. Times as “rapturously winning,” and she has been called a “marvelously versatile violinist” by the Santa Barbara News. As a former founding member of the Arianna String Quartet, former quartet-in-residence at Eastern Michigan University, she won first prize at the Fischoff, Coleman, and Carmel chamber music competitions. Sarah has performed throughout the country and abroad including festivals such as Tanglewood, Spoleto, Colorado Music Festival, Oregon Bach Festival, Norfolk Festival, Banff and the Portland Chamber Music Festival. She has collaborated with artists such as Glibert Kalish, Jeffrey Kahane, Andres Cardenes, Randall Hodgkinson, and Warren Jones. Sarah studied with Miriam Fried and Shmuel Ashkenasi. Currently, she is on faculty at Pomona College.

Violinist Sara Parkins is a Grammy-award winner for the Best Chamber Music Performance of the complete recordings of the Haydn String Quartets, with the Angeles Quartet. Sara is also a prizewinner of the Fischoff Chamber Music Competition with the Stonybrook Piano Trio. Sara is also a member of the acclaimed Eroica Trio. She has collaborated with prominent new music composers and performers such as Anthony Braxton, Mark Dresser, Zeena Parkins, and Guy Klucevsek. In addition, Sara has performed with the Orchestra of St. Luke’s in New York City and is currently principal second violinist with the Pasadena Symphony, an active studio musician, and was a member of the Rosetti String Quartet in Los Angeles. Parkins has performed at the Santa Fe Chamber Music Festival, the Banff Centre, Strings in the Mountains, and the Bravo Festival in Vail, Colorado. Internationally, Sara has participated at the Taklos Festival in Zurich, the Wels Unlimited Festival, Festival Internationale de Cadeques in Spain, and in Eisenstadt, Austria. She is featured on Phillips Classics, Victo, Avant, and Tzadik recording labels. She attended the Curtis Institute of Music and SUNY at Stony Brook.

Alma Lisa Fernandez, violist, attended the Oberlin Conservatory of Music and UCLA, where she received a master’s degree in viola performance. She performs regularly with the LA Opera Orchestra, LA Master Chorale, Long Beach Symphony, and Santa Barbara Chamber Orchestra. As a chamber musician, she has been described as “a soulful violist” (LA Times, Mark Swed), and has performed with chamber music Los Angeles-based ensembles including the Denali String Quartet, the California String Quartet, and the Capitol Ensemble. Fernandez has been featured as a soloist with the Pepperdine University Orchestra, the Jacaranda Chamber Music series, People Inside Electronics, and Electronics Live! at UC Riverside, where she premiered new works for viola and electronics. Alma is also active in the Los Angeles recording industry, having played for numerous motion picture soundtracks, television shows, and record albums. She is currently professor of viola at Pepperdine University in Malibu, CA.

An uncommonly versatile musician, cellist Maggie Parkins is equally at home performing chamber music, orchestral music, and the avant-garde, and has concertized throughout the Americas and Europe. In addition to being a member of the Eclipse Quartet Maggie, she is also the cellist of the Los Angeles-based Mojave Piano Trio and Brightwork new music. Her interest in music outside the classical tradition has led her to perform with Todd Sickafoose, the Jazz Passengers, the Anthony Braxton Tri Centric Ensemble, percussionist Alex Cline, and The Phantom Orchard Orchestra. As an orchestral performer, Parkins has performed under the batons of Seiji Ozawa, Leonard Bernstein, Simon Rattle, and Andre Previn. An active recording artist as well, Parkins has recorded extensively with harpist Zeena Parkins and accordionist Guy Klusevsek on the Tzadik, Avan, and Victo labels. Parkins has performed around the world at prestigious venues including the Santa Fe Chamber Music Festival, the Banff Centre, Festival Internacional de Musica de Cadaques (Spain), Heidelberg Castle Festival, Spoleto (USA and Italy), the Taktlos Festival (Switzerland), and the Bach Aria Festival in New York. She attended the Eastman School of Music and has a doctorate from SUNY at Stony Brook. She taught cello and chamber music at the University of California, Irvine for nineteen years and currently teaches cello at Pomona College.