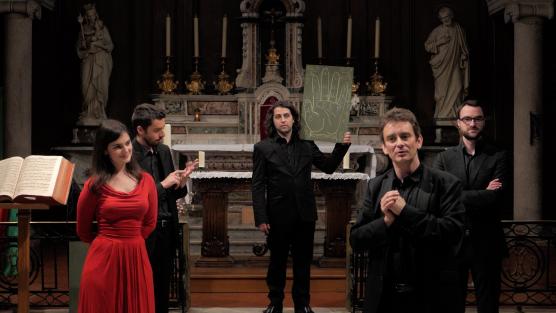 Read more about the Saturday symposium “New Perspectives on Improvisation and Compositional Process.”

In the Middle Ages and Renaissance, musical scores were
rare. The photocopy machine had not yet been invented, and musicians had to share a single choirbook or chansonnier. Deprived of visual support, each singer had, over the course of their life, to memorize a large number of melodies and internalize fundamental skills: learning the plainchant repertoire by heart, adding non-written voices to an existing melody, singing notated polyphony, improvising in all the modes, singing on the hand.

This concert probes the memories of the members of the Coclico Ensemble, who will draw on this large technical toolbox to create a variety of music on the spot, none of which they will have in written form: Gregorian chant, virtuoso polyphony from the Notre Dame school, trouvère songs, falsobordone, and a host of canons and live improvisation in five voices around a melody composed by the audience.

In a spirit musical and playful, as well as pedagogical, the members of the ensemble share their enjoyment of improvisation through concerts, spectacles and lectures with musical illustrations.

L’ensemble Coclico, founded in 2014, brings together professional singers who specialize in Renaissance and medieval music and improvisation. In concert, the ensemble revives the improvised polyphonies of the Middle Ages and the Renaissance, restoring to life the organa, hymns, French chansons from the court of Burgundy, motets, psalms, songs of the Renaissance, Italian lauds, English carols, and more.