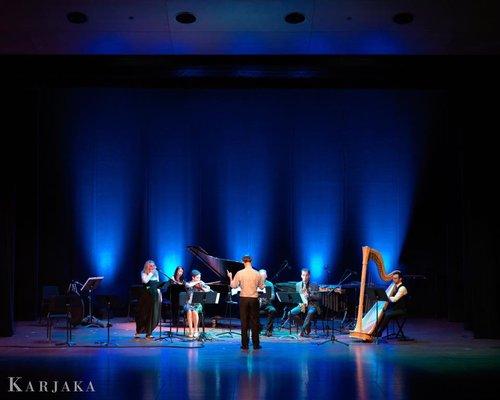 Kate Soper: Only The Words Themselves Mean What They Say (2010–11) for soprano and flute

Ensemble Dal Niente is a 22-member Chicago-based contemporary music collective with an international presence. The ensemble uses its flexible instrumentation, curatorial approach to programming, and relentless attention to interpretation to create engaging, inspiring, and immersive experiences that connect audiences to with the music of today. The Chicago Tribune has said that “Dal Niente is a model of what contemporary music needs, but seldom gets, to reach and engage a wider public.” The first ensemble to be awarded the prestigious Kranichstein Music Prize in Darmstadt, Germany, Dal Niente’s recordings have been released on the New Focus, New Amsterdam, Parlour Tapes+, Carrier, and New World labels.

The ensemble’s name, Dal Niente (“from nothing” in Italian), is a tribute to Helmut Lachenmann’s Dal niente (Interieur III), and a reference to the group’s humble beginnings.

“In May 2017 I will be traveling to the Western Ghats Mountain region in India. The Shillim Foundation is an outgrowth of the Shillim Institute, which is 3,500 acres of a super biodiverse landscape in the Western Ghats mountain region in Maharashtra, India, and it’s designated as an UNESCO hotspot for biodiversity. As part of the commission, I will spend 10 days doing sound research at the Shillim Foundation in Maharashtra, and would be working with expert sound engineer and designer Joel Gordon to produce onsite bio-acoustic recordings that will capture the sounds of the region, which I would use both for inspiration and as actual sonic structures. There are at least 325 globally threatened species in the Western Ghats, 6000 species of insects and 16 bird species endemic to the region, half of which are threatened. I’m incredibly touched by the Foundation’s mission to intersect the arts and ecological conservation in order for us to deepen our understanding and appreciation of our home, this planet.

In this new work for Dal Niente, I would approach the sound-world of specific insects, animals and plants in the same way that I have approached vocal sound production in humans. I have already begun entomological study (the University of Illinois has the top entomology program in the country) and I plan to cross-pollinate study in phonetics and entomological sound production during the research phase of this project. Human vocal production and insect sound production will be mapped on to each other and slices of both will mitigate the identity of the performing sound-body.”