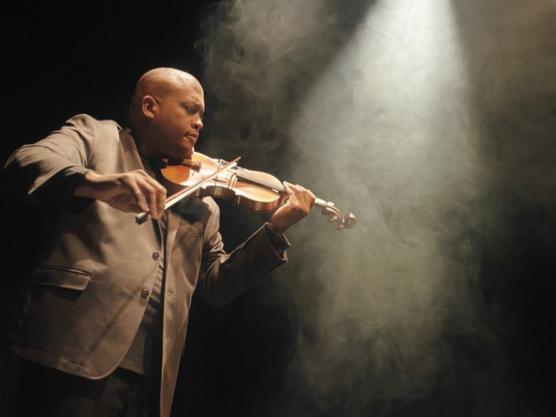 Program includes several regional or world premieres of works written in 2020, including two for Chase Spruill—

Violinist Chase Spruill has gained an international reputation as a performer of contemporary music, interpreting minimalist masters such as Philip Glass, Michael Nyman and Henryk Gorecki. In 2020, BBC Music Magazine hailed his debut solo album of the music of British composer Michael Nyman, citing that “Spruill plays with great spirit . . . and a great sense of presence” and calling him, “an engaging and convincing advocate.” This same year, Capital Public Radio called him,
“a breath-taking performer” with MusicWeb International highlighting that “Spruill plays with fire and yet sensitivity . . . and with absolutely secure rhythmic foundations.” He was a core faculty member with the nationally celebrated not-for-profit organization Community MusicWorks in Providence, RI, from 2012 to 2017, as well as a visiting professor of violin and orchestral studies at Wheaton College in from 2015 to 2017. Dedicated to exploring potential intersections between music and social justice, Spruill returned to his hometown in Vacaville to develop and run the music program at the new school Sierra Vista K–8 where he remains on faculty. He’s collaborated with other notable artists such as Kronos Quartet, composer/electric guitarist Steven Mackey (a UC Davis music alum ‘78), and BAFTA-nominated composer Brian Reitzell, releasing music from the critically acclaimed television series Hannibal. His recordings appear on the Philip Glass record label Orange Mountain Music and on Supertrain Records.

Free, online only via YouTube livestream
a Shinkoskey Noon Concert