Originally from Colorado, Phebe Craig spent her student years in Berlin, Brussels, and San Francisco. She has earned a reputation as a versatile chamber musician and recitalist and has performed and recorded with many early music ensembles. As a specialist in basso continuo realization, she has accompanied many prominent early music soloists, in both concerts and recordings. She has appeared in concert throughout the United States and Europe:  at the Carmel Bach Festival, the Regensburg Tage Alter Musik, New York State Baroque, the Galway Early Music Festival, and the Berkeley Early Music Festival.

She has co-produced a series of Early Music play-along recordings for treble instruments (The DiscContinuo series) and co-authored a Guide to Baroque Dance for Musicians (Dance-at-a-Glance). She has been on the faculty of numerous Baroque workshops and was the director of the San Francisco Baroque Music and Dance Workshop for many years.

In addition to teaching harpsichord and Early Music Chamber Ensembles, she teaches ear-training and sight-singing (17A-B-C), keyboard proficiency (2A-B-C), and intermediate piano and music theory (3B).

pacraig[remove-this-and-replace-with-at]ucdavis.edu
Back
This item appears in: 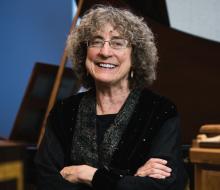