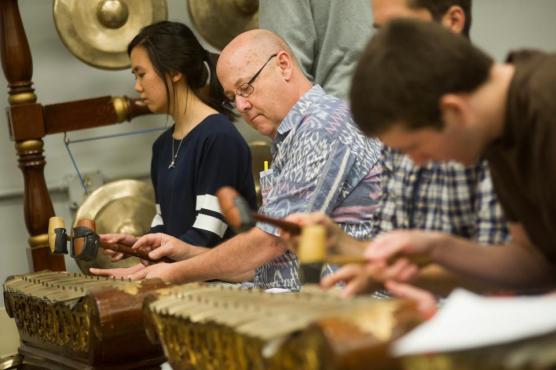 UC Davis Professor of Music Henry Spiller has been selected as a Fellow at the Netherlands Institute for Advanced Study (Amsterdam) for 2019–20, where he will be in residence during the fall quarter of 2019. Spiller, who has spent a number of years researching music of West Java, Indonesia and who recently published a book titled Javaphilia: American Love Affairs with Javanese Music and Dance (University of Hawai’i Press, 2015), will take the opportunity to write about the interrelationships of cultural, natural, and human resources, in the bamboo instruments made in Bandung, Indonesia. Spiller’s project is titled “Bamboo Murmurs: Music, History, and Place in Bandung, Indonesia.” He joins a carefully selected community of sixty scholars, artists, and writers at the Institute.

Over the past decade, residents of Bandung, Indonesia, have been reviving bamboo musical instruments in inventive ways. Bamboo Murmurs seeks to understand how this bamboo renaissance helps individuals fashion uniquely Sundanese places, histories, and identities by considering bamboo’s long-standing prominence in the ecology of highland West Java, its versatility as a sound-producing material, the kinds of cooperative musical processes that are compatible with bamboo technologies, and the symbolic associations that have accrued over the generations to bamboo music-making. By linking these realms of human endeavor, Bamboo Murmurs contributes to a dialogue about the interrelationships of cultural, natural, and human resources.

NIAS—one of the institutes of the Royal Netherlands Academy of Arts and Sciences (KNAW)—provides a physical and intellectual space for advanced research in the humanities and social sciences that is driven by curiosity and cross-discipline collaboration. It offers temporary fellowships to international and Dutch scholars. NIAS is located in Amsterdam.