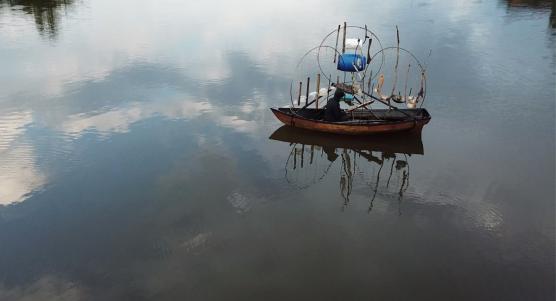 An excerpt called “Gaia|Gyre|Siren” from Newtown Odyssey, the site-specific opera composed by Professor Kurt Rohde, was recently performed. In conjunction with the performance, Rohde and his collaborators were interviewed for Urban Omnibus, a publication of the Architectural League of New York.

Rohde (composer) was profiled along with Marie Lorenz (sculpture artist) and Dana Spiotta (writer). The team won a Creative Capital grant in 2021 to create the work. The full performance is scheduled to premiere in 2023.

The opera is envisioned as a travel diary, presented on the Newtown Creek itself with both audience and performers travelling along the water amid floating stages. The Newtown Creek separates the border of Queens and Brooklyn, and has a history of being one of the most polluted waterways in the country. Themes of the piece include climate change, environmental justice, and civic responsibility.

“I think the opera is going to be beautiful,” said Rohde. “The more connected I am to the actual space and the more exposure I have to it, the more I get my own articulable understanding of why this is beautiful to me….There is something arresting about being on the creek. But without anyone telling you—that there’s something wrong with the water. And yet, it’s serene, it has its own type of calmness, and it’s alive. There are all sorts of contradictions side by side.”

Here is a preview of Newtown Odyssey.

Rohde and the project have also been profiled in Solar Journal.