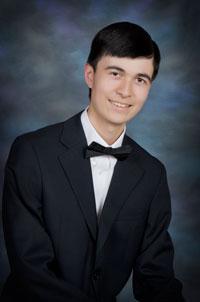 Jeremiah Trujillo is an active soloist, collaborative pianist, and historical musicologist. He is the recipient of numerous awards, including a special prize for the interpretation of a nineteenth-century Romantic work at the 2013 San Francisco Young Pianists Competition. He is a recipient of the 2018 Faculty Recognition Award for Excellence in Musical Performance at UC Davis, and the 2014 Eisner Prize for Music, awarded at UC Berkeley. Jeremiah was also a finalist in the 2013 Carmel Music Society piano competition, held at Sunset Center in Carmel, CA. He participated in numerous master classes with distinguished artists including Jon Nakamatsu, Nelita True, John Perry, Frederic Moyer, Carl Blake, and Katherine Chi.

Jeremiah is the winner of the 2009 Earl R. and Marilyn Ann Kruschke Prize in Piano Performance, held at California State University, Chico. In 2004 he placed first in the high school division of the North State Symphony’s Young Artists Auditions held in Chico, CA, and at age 12 subsequently performed the first movement of the Grieg Piano Concerto, op. 16, with the North State Symphony in November of that year. He performed at both Laxson Auditorium at CSU, Chico and at the Cascade Theatre in Redding. In February 2009, Jeremiah again won the North State Symphony’s Young Artist’s Auditions, this time in the college division, and performed in September 2009 the first movement of the Khachaturian Piano Concerto at the North State Symphony’s season-opening concerts. He also performed the Mozart Concerto No. 20, K. 466 with the Shasta Symphony Orchestra in Redding, CA in October 2012, and the first movement of the Grieg Piano Concerto with the UC Davis Summer Symphony in September 2015. He gave multiple solo recitals at Redding, CA Old City Hall as part of the Performing Arts Society’s monthly concert series and also has performed at St. Paul’s Towers in Oakland, CA, and San Francisco Towers. Jeremiah recorded an album of Spanish piano works, now available on CD Baby, titled “Works by Albéniz, de Falla, Granados, Salazar.”

As an experienced accompanist, Jeremiah has worked for the Mondavi National Young Artist Competition, the Westside Performing Arts Company, and regularly accompanies recitals at UC Davis. In Spring 2011, he was the accompanist for the Simpson Chorale, one of the choral groups of Simpson University. He also accompanied in June 2011 a vocal masterclass with Franc D’Ambrosio, Broadway star and student of Pavarotti. At UCD, Jeremiah was the assistant conductor for the University Chorus (Winter 2018 and Spring 2018). From November 2017 to October 2018, Jeremiah coordinated the performance salon series at UC Davis. He played for XL Choirs of Northern California from 2005 to 2012 under the directorship of Kati Rosten. Since 2009, he has been an accompanist for the Shasta Vocal Institute, collaborating with singers in performances of art songs and arias, as well as opera scenes  including The Tales of Hoffmann by Jacques Offenbach, La traviata by Verdi, The Magic Flute by Mozart, Lucia di Lammermoor by Donizetti, I Puritani by Bellini, and West Side Story by Leonard Bernstein. Jeremiah has also accompanied the Shasta College Concert and Chamber Choirs.

In Spring and Fall 2013, Jeremiah was a continuo player for the University Baroque Ensemble at UC Berkeley, as well as a keyboardist for the UC Berkeley Symphony Orchestra. Jeremiah has performed chamber music with the Sundial Music Project, at Shasta College, and in the UCB Baroque Ensemble, including other venues, in an assortment of classical, old standards, and contemporary jazz piano at the opening of the Bank of America’s loan division in downtown Redding. In 2008 and 2009, he performed at North State Symphony fundraising banquets held at Riverview Country Club in Redding. He has volunteered his talents by performing at the North Berkeley Senior Center and on a weekly basis at Shasta Regional Medical Center.

Jeremiah began his piano studies at age six with Jeannie Neves. Past teachers include Jacqueline Chew, Don Erickson, Ronald Cole, and Dr. Alexander Tutunov, and he studied harpsichord with Katherine Heater and Davitt Moroney. Jeremiah was Valedictorian at his graduation from Hope High School at age 14. At Shasta College, he received the Zinn Award. Jeremiah holds an A.A. in music from Shasta College, a B.A. in music with Highest Distinction from UC Berkeley, and a M.A. in music from UC Davis. At his graduation from UC Berkeley, Jeremiah received the Departmental Citation in Music and the Matthew William Fisher Memorial Prize in Music. For his research into the solo piano works of Franz Schubert, he was a recipient of the 2014 Charlene Conrad Liebau Library Prize for Undergraduate Research.

Jeremiah is currently a Ph.D. student in historical musicology at UC Davis; his research interests include cultural diplomacy and music, Mexican popular song, and nature musicology. At the 2016 regional meeting in San Francisco of the Society for Ethnomusicology, he presented his paper “‘Pan-American Union, Hollywood, and Hemispheric Solidarity’: Mexican and Spanish Popular Song during the Good Neighbor Policy.” His dissertation focuses on musical cosmopolitanism in early-twentieth-century Spain. He resides in El Sobrante, CA.

jctrujillo[remove-this-and-replace-with-at]ucdavis.edu
Back
This item appears in: