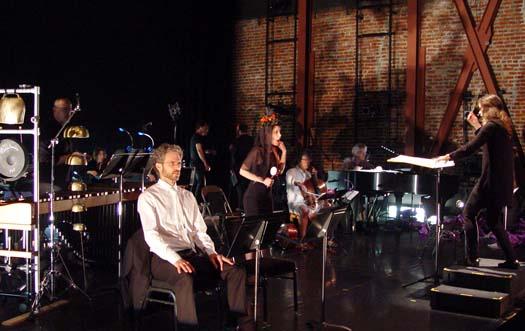 In Saramago’s 2005 novel, death appears as a woman who falls in love with a cellist and is transformed by that love. It’s a perfect vehicle, Rohde says, for using music to convey the drama. “In this opera, music is the transformative force that turns death from this thing that doesn’t exist into a human being. It’s a very confusing process for her, and she has to do things that are increasingly human. For example, she’s never spoken—she never had to—and when she starts to speak, I make her stutter and gradually start to form words. The cellist character vocalizes as if he’s tuning up the instrument, then playing the Bach Suites.”

The instrumentalists from the Left Coast Chamber Ensemble, where Rohde is “composer/violist/artistic advisor” were integral members of the piece and played the complex music under the young conductor Matilda Hofman splendidly.

It’s a wonderful moment of musical characterization, in which the composer, Kurt Rohde, uses simple resources to tell the audience something quite specific and clear about what it’s witnessing. Then—like everything else in this manic but short-breathed creation—it’s over in a flash, and the evening plunges back into obscurity.

In the ultimate game-changer for some biogenetic dreamers, death disappears and we live forever. Count on the artists to barge in and complicate everything.

I’m always amazed to hear people say opera is a dying art form. Nothing could be further from the truth. Indeed, according to recent statistics from Opera America, there are more new operas being written and produced in this country than ever before.

Death comes to us all. But in a new chamber opera conceived and co-created by professor Tom Laqueur, death takes a holiday—and drama ensues, with music.

Matilda Hofman, whose conducting has been described as having “a striking sense of purpose” and “taut and finely controlled” (San Francisco Gate), has a busy and varied performance schedule. She works regularly with a wide range of groups in Europe, and in California, which she has made her home. Matilda has performed at the Salzburg Festival, Berliner Festspiele, Holland Festival, and Ruhrtriennale among others.