While in Germany, Friedhoff served as Concertmaster of the Sinfonietta Saarbruecken for five seasons. Prior to joining the Saar State Opera Orchestra, she was a member of the first violin sections of the Rhine Philharmonic Orchestra and the Philharmonia Hungarica. During her tenure at the Saar State Opera she was a founding member of the Piano Trio Pastorale and initiated an American composers chamber music series with that ensemble. In addition to her work as a performer, Friedhoff is a lecturer in applied violin and chamber music at UC Davis. She also teaches privately at her home in Davis. Previously she had a private violin studio in Germany and taught in the University of Texas renowned String Project while pursuing a master’s degree. Concurrent with her studies in Texas, she held the position of principal second violin with the Austin Symphony and assistant concertmaster with the San Angelo Symphony.

Friedhoff holds the Bachelor of Music degree from Indiana University and Master’s degree from the University of Texas, Austin, and has had fellowships to the Tanglewood Music Festival, Blossom Festival, Yale Summer School of Music, and New College Music Festival in Sarasota, Florida.  Her violin teachers include Franco Gulli and Stephen Clapp. She studied chamber music extensively with renowned coaches including Rafael Hillyer, Joseph Silverstein, Louis Krasner, the Tokyo String Quartet, members of the Cleveland Orchestra and the Boston Symphony, as well as Georges and Eva Janzer of the Grumiaux Trio and Michael Kuttner of the Budapest String Quartet. She is currently concertmaster of the Bear Valley Music Festival and of Opera Modesto, as well as assistant concertmaster of the Sacramento Choral Society Orchestra.

jefriedhoff[remove-this-and-replace-with-at]ucdavis.edu
Back
This item appears in: 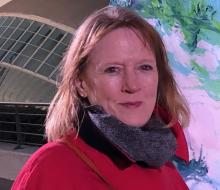