William E. Valente (1934−1993) was professor of music at UC Davis from 1950 to 1993. He taught music theory and composition, was an undergraduate adviser for the Department, and conductor of the University Concert Band. In honor and memory of Professor Valente and his impact on the many students he taught, guided, and inspired during his life as a mentor, an endowment was established in name: The William E. Valente Music Scholarship Fund.

He attended the University of Tulsa and Harvard University, where he studied composition with Leon Kirchner. He was assistant professor in music at Fisk University and visiting assistant professor of music at Vassar College, joining the Department of Music at UC Davis in 1972. He received numerous awards and commissions for new compositions, including concerti for cello and for piano with orchestra and works for symphonic band and for chorus (including two masses). 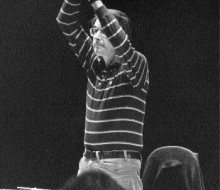