Her dissertation, “‘Hood, Prison, Body: Lil Wayne and the Spaces of Gangsta Signification,” explores the ways in which America’s most popular hip-hop artist conveys and transforms racial meaning through music, lyric, and image.  She currently teaches African American Music (MUS 28) at UC Davis and serves as a scholarly advisor for Rap Genius.She has conducted fieldwork in New Orleans, Ghana, Sierra Leone, and Trinidad. She has presented at major conferences including the 2011 National Association for Ethnic Studies conference in New Orleans and the 2012 Society for Ethnomusicology conference in New Orleans.

Additionally, Sarah is the founder and Executive Director of Arts Education International, a nonprofit organization that provides sustainable, community-based arts programs for orphaned and abandoned children in West Africa.  She has received multiyear Compton Foundation awards for her work in Sierra Leone and was recognized as one of thirteen top social entrepreneurs under 25 in 2011 by Do Something.

Room 204C, Music Building
sfgeller[remove-this-and-replace-with-at]ucdavis.edu
Back
This item appears in: 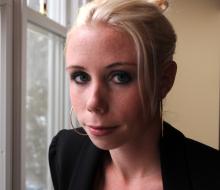